Next Steps in Realizing Justice for All

The United Nations Sustainable Development Goals lay out ambitious targets to guide global and national development policies through 2030, including target 16.3's promise to "ensure equal access to justice for all." However, as data on people's experience of justice grows, it is becoming increasingly clear that the world is not on track to meet this target.

Over the course of the last year, the World Justice Project (WJP) has led the first-ever effort to categorize and synthesize data on people's justice needs in order to assess the scale and nature of the global "justice gap" — i.e., the number of people who have at least one unmet justice need. Conducted in collaboration with the Justice Gap Working Group of the Task Force on Justice,i the justice gap assessment demonstrates that many people face justice problems, and too few get the justice they need for both everyday problems and severe injustices. The WJP estimates that:

When viewed in the aggregate, these figures amount to 5.1 billion people — or approximately two thirds of the world’s population — who face at least one of these justice issues, with many confronted by multiple injustices. While these injustices vary in severity and often overlap following systematic patterns of exclusion, this global justice gap reveals that the demand for justice is not being fulfilled for a majority of the world’s population. Closing the justice gap is therefore vital to realizing the broader development agenda and its vision of a "just, equitable, tolerant, open, and socially inclusive world in which the needs of the most vulnerable are met."ii

For more information on the measurement framework, data sources, and methods used to arrive at these justice gap estimates, please see Measuring the Justice Gap: A People-Centered Assessment of Unmet Justice Needs Around the World.

An important portion of the global justice gap are the estimated 1.4 billion people who have unmet civil or administrative justice needs. A growing body of research confirms that a majority of people's everyday justice problems are civil rather than criminal in nature,iii and that the inability to resolve everyday civil and administrative problems diminishes individuals' participation in the economy, undermines their social and physical wellbeing, and reinforces the poverty trap.iv For this reason, the WJP has undertaken a global study on legal needs and access to justice in order to collect globally comparable data on the prevalence of everyday justice problems and the paths that people follow to navigate these problems.

Every year, the World Justice Project administers its General Population Poll (GPP) to collect data from representative samples of the general public around the world, which are used to compute the scores and rankings for the annual WJP Rule of Law Index®. Drawing on methodological guidance produced by the Organisation for Economic Co-operation and Development (OECD) and Open Society Justice Initiative (OSJI), the WJP developed a survey module on legal needs and access to justice for inclusion in the GPP, which builds on what is known in the literature as the "Paths to Justice" tradition. As part of the WJP's household data collection cycle, this module was administered to more than 100,000 households in 101 countries between 2017 and 2018. The resulting data tell us that: 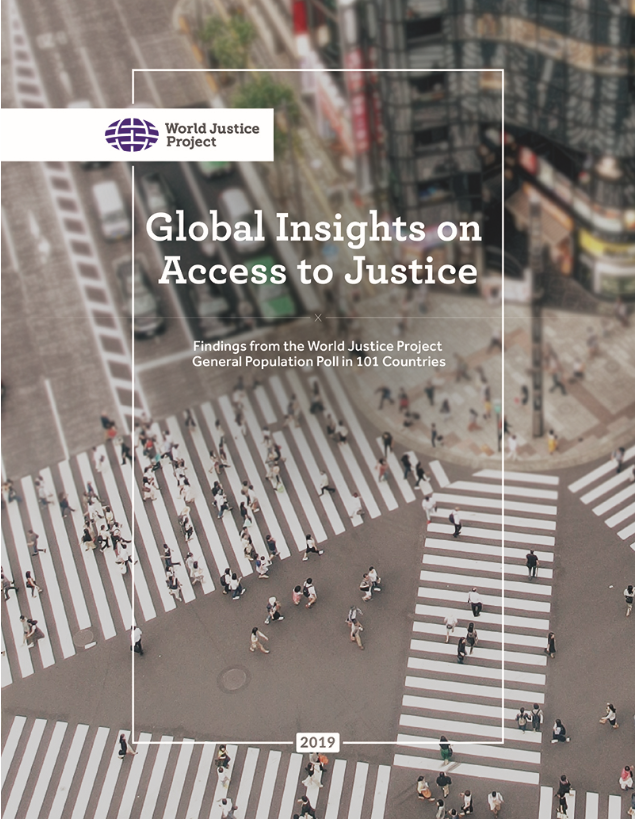 On June 27, 2019, WJP will release its newest report, Global Insights on Access to Justice 2019, capturing comparable data on legal needs and public access to civil justice on a global scale, representing the voices of more than 100,000 people in 101 countries. The report is a follow-on to the research presented in WJP’s Global Insights on Access to Justice 2018, which presented data gathered for 45 countries polled as part of the WJP's global study on legal needs and access to justice. The 2019 report will show data for an additional 56 countries and will feature updated country profiles and downloadable summary statistics for all 101 countries polled in 2017 and 2018 that can serve as tools for policymakers, advocates, and researchers seeking to better understand the state of access to civil justice in the world.

These efforts are currently focused on the opportunity presented in 2019 by the UN High-level Political Forum (HLPF) in July, where governments will review progress against Sustainable Development Goal (SDG) 16, which commits countries to "promote peaceful and inclusive societies for sustainable development, provide access to justice for all, and build effective, accountable and inclusive institutions at all levels." In September, heads of state will convene to review progress across all 17 SDGs at the quadrennial SDG Summit. Seizing this opportunity in the weeks and months ahead will require:

Driving the Global Conversation on the Rule of Law

In 2019, the World Justice Project and our research products were featured in top media outlets around the globe, citing WJP Rule of Law Index scores, new research on access to justice and the global justice gap, key convenings for the justice agenda, and more.