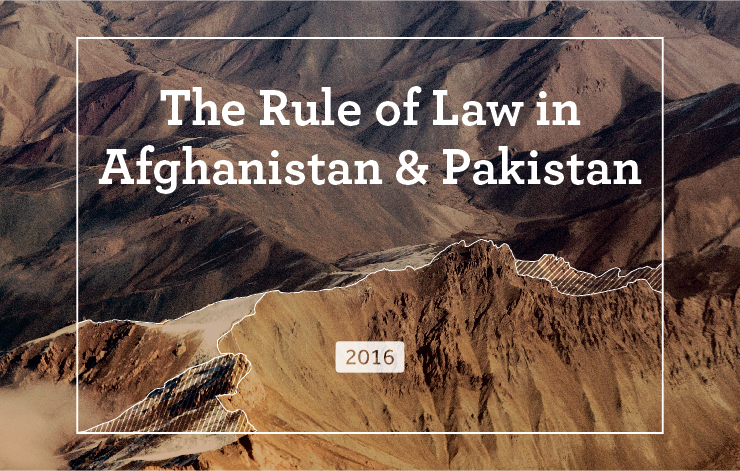 Representing the voices of over 10,000 people, the reports present findings from two nationally-representative surveys conducted in Afghanistan and two World Justice Project surveys conducted in five urban centers in Pakistan from May to September 2016. The first survey is WJP’s General Population Poll conducted for the WJP Rule of Law Index®, which captures data on the general public’s experiences and perceptions related to government accountability, bribery and corruption, crime, and access to justice.

Whereas the WJP’s flagship WJP Rule of Law Index® offers aggregate rule of law scores, the two new reports present disaggregated question-level data as a series of thematic briefs to highlight different facets of the rule of law as it is experienced by ordinary citizens in Afghanistan and Pakistan. These briefs touch upon issues of accountability, corruption, fundamental rights, access to information, crime, justice – criminal, civil, and informal – as well as the role of women in society.

"Ahead of a Democracy Summit, Start at Home and Listen to Our Friends Abroad"

On the Brookings Institution's Order from Chaos blog, WJP Chief Engagement Officer Ted Piccone discusses how President Biden can work toward democracy after the Trump Administrations effects on the rule of law in the United States.

“To Defend the Rule of Law, We Must Agree on Its Meaning”

In an op-ed for The Hill, WJP Executive Director Elizabeth Andersen discusses the importance of a shared understanding of the rule of law in order to uphold its ideals.

WJP Calls on U.S. Congress to Uphold the Rule of Law

The United States—and specifically the U.S. Congress—confronts a critical test of its rule of law.

During a year in which the rule of law became ever-more contested and politicized, the World Justice Project provided common ground and a credible guide to driving justice forward.