The World Justice Project Recognizes Dr. Adam Bodnar and the Office of Poland’s Commissioner for Human Rights with 2019 Rule of Law Award

Poland’s independent ombudsman and his team honored for courageous efforts to stem the country’s backsliding on judicial independence and fundamental rights.

April 30, 2019, THE HAGUE, NETHERLANDS – The World Justice Project (WJP), an independent, multidisciplinary organization working to advance the rule of law worldwide, today announced the winner of the WJP Rule of Law Award. The award recognizes extraordinary achievements by individuals and organizations to strengthen the rule of law in exemplary ways.

This year’s award goes to Dr. Adam Bodnar, the Commissioner for Human Rights of Poland (Ombudsman), and the staff of the country’s independent legal institution charged with monitoring citizens’ rights and intervening when such rights are infringed. In recent years, Poland has been experiencing a steady and significant deterioration in constraints on executive powers and respect for freedoms of expression and assembly, as reflected in the 2019 WJP Rule of Law Index. 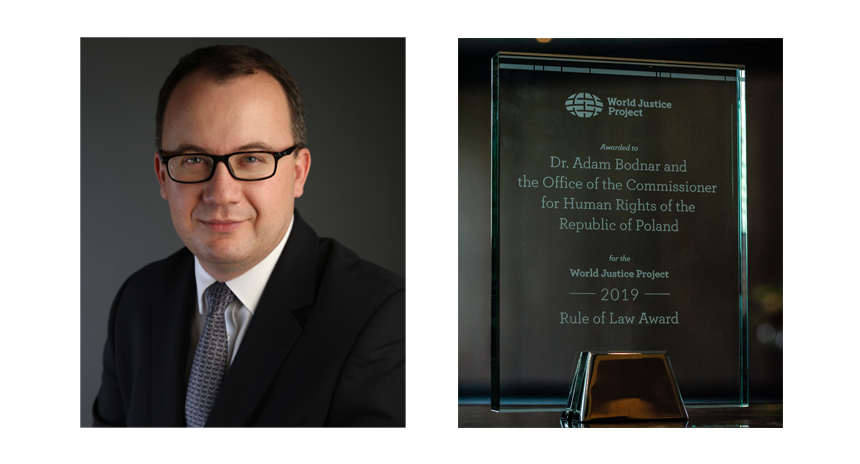 “We have entered a challenging era in which basic principles of accountability and open government are under attack in both democratic and non-democratic states,” said William H. Neukom, founder and CEO of The World Justice Project. “The creative and tenacious efforts of Dr. Bodnar and his team to protect the independence of Poland’s judicial system and its citizens’ rights to participate freely in civic affairs provide a beacon of hope to others around the world fighting for just laws and equal treatment.”

A leading spokesman for the protection of fundamental rights in Poland and throughout Europe, Dr. Bodnar was elected by Poland’s parliament in 2015 to serve a five-year term as the country’s independent ombudsman for human rights. Since then, he and his staff have been confronted with a series of executive and parliamentary challenges to the independent functioning of Poland’s judicial and prosecutorial system, including its highest courts, and to the exercise of citizens’ rights to participate freely in public affairs. The governing party has also used its parliamentary majority to adopt new laws controlling state media and limiting freedom of information. In response, Dr. Bodnar and the Office of the Commissioner for Human Rights have engaged in outspoken defense of Poland’s constitutional principles and directly engaged in strategic litigation to uphold them. Their principled stance against politicization of independent institutions has sparked hateful attacks and personal threats in state media and attempts by politicians of the ruling party to remove him and limit the commissioner’s powers.

“This distinction is an important recognition for all rule of law defenders in Poland - the Ombudsman is just one of them. It is a sign of appreciation and solidarity in view of a serious crisis that we hope to overcome. If we succeed, our experiences will be of great value for other countries and institutions facing similar attacks on judicial independence and constitutional order.”

The World Justice Project Rule of Law Award ceremony will take place at the World Justice Forum in The Hague – a global gathering of over 600 leaders, experts, and practitioners designed to increase knowledge and awareness of the many hurdles to access to justice and to stimulate action to close the justice gap. The award will be presented this year by WJP Board Members Ellen Gracie Northfleet, former Chief Justice of the Federal Supreme Court of Brazil, and Petar Stoyanov, former President of the Republic of Bulgaria.

COVID Set Justice Back. How Do We Leap Forward?

The most recent WJP Rule of Law Index found that the pandemic has exacerbated rising authoritarianism, eroded respect for fundamental rights, and fueled justice delays around the world.  At the upcoming World Justice Forum (May 30–June 3), advocates and experts from civil society, government, and the private sector will convene to plot a constructive path forward.  How can we reinvigorate momentum to reach Sustainable Development Goals by 2030 and ensure dignity and justice for all?

Join us in The Hague for Justice Week!

The city of The Hague in the Netherlands is home to more than 200 international organizations, including the International Court of Justice. This makes it the ideal setting for the World Justice Forum, the premier international event for advancing rule of law around the globe. The World Justice Forum runs from May 30-June 2, but your experience doesn’t have to start or end there, as it is the anchor event for The Hague Justice Week 2022 running throughout the city.

The United States is facing significant and growing rule of law challenges. Diverse datasets capturing various dimensions of the rule of law reflect mounting concerns about democratic accountability, trust in electoral processes, contested rights of free expression and assembly, and systemic inequities in the U.S. justice system, among other issues, These trends raise questions about the quality of governance in the United States and, given the leadership role of the United States globally, they have implications for respect for the rule of law around the world as well. New data and related advanced analytical and machine learning methodologies hold great promise for improving understanding of these current U.S. rule of law trends and identifying reform needs and opportunities. As part of a new multi-year initiative focused on rule of law in the United States, the World Justice Project (WJP), together with the Wright Center for the Study of Computation and Justice Communities at Dartmouth College and Bright Line Watch, plans a two-day workshop for discussion of works-in-progress generating data insights on contemporary U.S. rule of law issues. The workshop will take place November 11-13, 2022, at Dartmouth College in Hanover, NH. Travel stipends will be available to support participation by those selected to present papers at the workshop.

Russia, Ukraine and the Dangers of Authoritarian International Law

Vladimir Putin’s claims of genocide in Ukraine were more than a fictional basis to rally domestic support for an invasion, according to University of Chicago Professor Tom Ginsburg. They were an example of a growing trend Ginsburg has termed “authoritarian international law.”  We spoke with Ginsburg, the co-chair of the World Justice Project’s research consortium and the author of the 2021 book Democracies and International Law