Today we are pleased to introduce the World Justice Project (WJP) Open Government Index™ 2015, the first effort to measure government openness based on the general public’s experiences and perceptions worldwide.

The WJP Open Government Index presents scores and rankings for 102 countries organized around four dimensions: publicized laws and government data, right to information, civic participation, and complaint mechanisms. Scoring for the Index is drawn from more than 100,000 household surveys and in-country expert questionnaires.

In addition to global, regional, and income-peer scores and rankings, the WJP Open Government Index interactive data site displays selected survey responses by country, with gender and socio-economic breakouts. An accompanying report provides global insights on the relationship between open government and other aspects of governance and development: 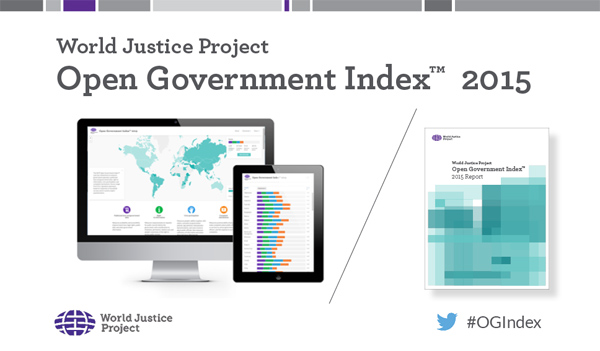 We will be posting news and coverage about the WJP Open Government Index throughout the coming days to our website and social media channels—watch for the hashtag #OGIndex. For more information, see our report landing page at: http://worldjusticeproject.org/open-government-index/