What WJP Data Says About the Rule of Law in Poland

Significant Debate About Rule of Law in Poland
Recent legislative measures passed by Poland's government have sparked significant debate about the country's adherence to the rule of law. In particular, new laws affecting the Supreme Court and the National Council of the Judiciary have led to a standoff between the president of the Supreme Court and the government, as well as hearings by the European Union.

Data on the Rule of Law
In the midst of this debate, quantitative information can provide important context regarding the rule of law in Poland. The World Justice Project (WJP), an independent, multidisciplinary organization working to advance the rule of law worldwide, publishes indicators on the rule of law in 113 countries around the world, including Poland, through its Rule of Law Index.

The Index presents a portrait of the rule of law by providing scores and rankings based on eight factors: Constraints on Government Powers, Absence of Corruption, Open Government, Fundamental Rights, Order and Security, Regulatory Enforcement, Civil Justice and Criminal Justice. It draws upon two primary sources of data: a household survey (General Population Poll - GPP) which polls 1,000 households in the three largest cities of each country, and an expert survey (Qualified Respondent’s Questionnaire - QRQ). You can read about those surveys here and about the methodology here.

Poland’s Results
So what does the data tell us? Poland's results from the Index indicate a recent decline in adherence to the rule of law. Poland dropped three positions in overall rule of law performance from 22 out of 113 countries in the 2016 WJP Rule of Law Index to 25 in the 2017-2018 edition.

Poland received an overall score of .67 out of 1.00, down from .71 in 2016. In relation to the European Union its score places it below Spain (.70) and on par with Slovenia (.67), ranking 14 out of 21 indexed countries in EU. Significant trends included a deterioration in Constraints on Government Powers, Open Government, Fundamental Rights, and Criminal Justice. Poland’s full country profile is available here. 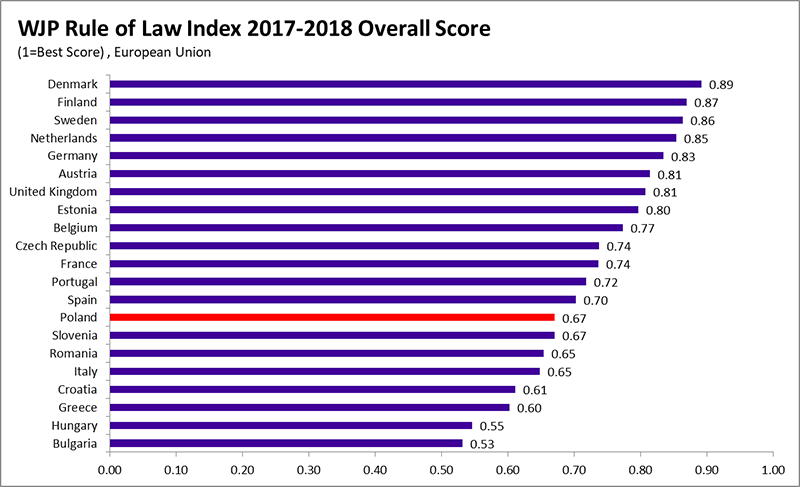 Saliently, Poland saw one of its largest declines in the factor of Constraints on Government Powers, receiving a score of .61, compared to .68 in 2016, and dropped from 19 to 21 in the rankings for Western Europe and North America. Helping drive this drop was the sub-factor "Government powers are effectively limited by the judiciary," which measures whether the judiciary has the independence and ability, in practice, to be an effective check on the government. In this sub-factor, Poland's score declined from .62 to .56, moving it to 20th in Western Europe and North America, and 53rd globally. 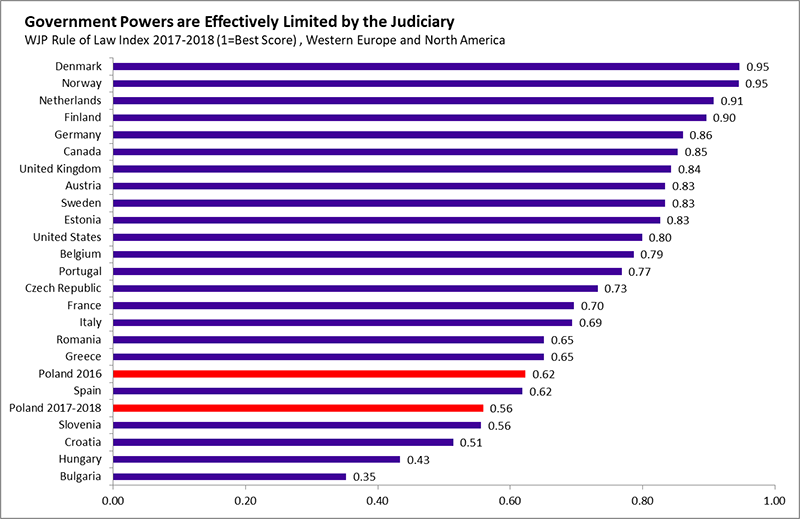