What Does Bolsonaro's Election Victory Mean for the Rule of Law?

This story is a companion piece to WJP's recent Rule of Law Talk interview with Robert Muggah. Listen to the complete podcast conversation on Jair Bolsonaro and populism in Brazil here.

On October 28th, the Supreme Electoral Tribunal announced Jair Bolsonaro as the winner of Brazil’s presidential election. Last year, Brazil reported one of the world's highest homicide rates at 30.8 per 100,000 people, which its criminal justice system has struggled to address. Mr. Bolsonaro, an anti-establishment figure who in the past has expressed support for the return of military rule in Brazil, capitalized on the security issue and will soon assume power, with Brazil's rule of law status already in a fragile state given years of rising crime and recent corruption scandals.

Rule of Law Data about Brazil

In the midst of Brazil's political transition, the World Justice Project’s (WJP) Rule of Law Index provides important context on Brazil's rule of law status. In the WJP Rule of Law Index 2017-2018, Brazil earned an overall Index score of .54 on a scale from 0.00 to 1.00 with 1.00 representing the strongest adherence to the rule of law, a slight decline from .55 in 2016.

Among the eight factors assessed by the WJP Rule of Law Index 2017-2018, Mr. Bolsonaro's presidency may pose the most immediate threat to the Brazilian criminal justice system's adherence to the rule of law. In the 2017-2018 report, Brazil saw a decline in its criminal justice score, from .39 to .37, and its score for "Due process of law and rights of the accused" was .38, lagging behind its regional and income group peers.

To counter Brazil's crime, Mr. Bolsonaro has expressed support for torture, advocated for subverting the criminal justice system in favor of militarizing both civilians and the police, and promoted extrajudicial killings by pledging to provide police a "carte blanche" to kill. In a conversation on the World Justice Project's Rule of Law Talk podcast, Robert Muggah, research director and co-founder of the Igarapé Institute in Brazil, noted, "When it comes to Bolsonaro's tone on crime control and the rule of law, I don't think there's much to celebrate. There is certainly not much to be optimistic about."

As highlighted by data collected for the WJP Rule of Law Index 2017-2018, citizens are already concerned about legal violations, protection of due process, and impunity among Brazil's police. For instance, only 31% of respondents believe that police act according to the law, 29% feel that police are punished for violating the law, and only 24% think that police respect the basic rights of suspects. (See chart: "The Police and Due Process in Brazil.") 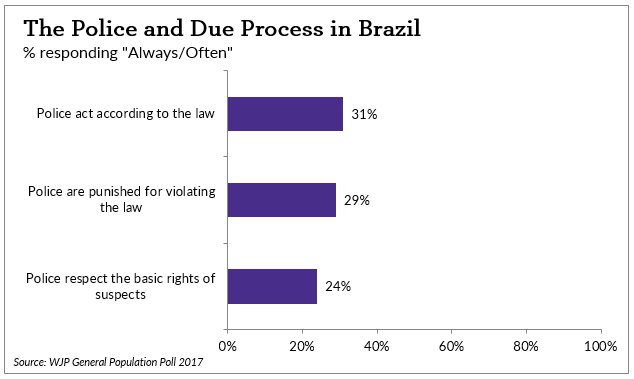 The Future of Brazil

Coupled with Mr. Bolsonaro's campaign rhetoric, the data paint an ominous view of the potential future for Brazil's criminal justice system. If Mr. Bolsonaro were to implement radical reforms modeled on his campaign promises, the impact on Brazil's policing, and by extension the criminal justice system, could significantly affect the public's perception of and experience with due process and the rule of law in years to come.

There are policy alternatives, many of which are being developed by the Igarapé Institute today. Indeed, as stated by Mr. Muggah, not only do Mr. Bolsonaro’s proposed strategies, "Not work on their own objectives, in terms of achieving the outcomes they expect, but they also generate negative externalities along the way." Instead, the Igarapé Institute supports citizen security, "An idea born in the Americas in the 1990s, and… [was] led by enlightened mayors and civic groups who were pushing back against authoritarian style governments in the 1960s, 70s, and 80s, and include[s] an array of strategies and practices, all of which are based on data, informed by good practice, and shaped by an adherence to human rights. They range from strategies such as hotspot community policing, to more enlightened criminal justice reform, to alternatives to prison and looking at rehabilitation for inmates, to heavy investments in prevention… And the good news is that in Brazil and across Latin America there actually are positive examples of strategies that have improved public safety."

As discussions about Mr. Bolsonaro's impact on the rule of law continue, the WJP Rule of Law Index will help frame the conversation and encourage policy choices that strengthen Brazil's adherence to the rule of law.

Dozens of recent books chronicle rising authoritarianism and question whether democracies can survive. What do these trends mean for international law and practice? Professor Tom Ginsburg joins us to discuss implications in contemporary policy contexts, including management of the global COVID-19 pandemic.

On May 13, 2020, the International Institute for Democracy and Electoral Assistance (International IDEA) and the World Justice Project (WJP) co-hosted an online event discussing "The impact of COVID-19 on democracy and rule of law in Latin America."

The WJP Mexico States Rule of Law Index 2019-2020 report measures adherence to the rule of law in each of Mexico's 32 states.

Divorce is a basic exercise in access to justice. It is the primary recourse for women who are victims of domestic violence, child marriage, or financial subjugation at the hands of a spouse.