UN International Day in Support of Victims of Torture: Measuring Torture and Ill-Treatment in Mexico

The United Nations International Day in Support of Victims of Torture, commemorated on June 26, calls on stakeholders, institutions, and individuals around the world to unite in support of the total eradication of this human rights abuse. Torture has long been condemned by the UN as one of the vilest acts perpetrated by human beings, on human beings. This day serves as an important reminder of the hundreds of thousands of people who have been victims of torture, and of those who are still tortured today.

In 2014, Juan Mendez, then UN Special Rapporteur on torture and other cruel, inhuman or degrading treatment or punishment visited Mexico. After his visit, he determined that torture and ill-treatment are widespread in Mexico.1 He also underlined the difficulty to know the actual number of cases due to the lack of national records.2

This lack of reliable statistics presented an obstacle to assessing the problem of torture and to designing public policy to combat it. Thus far, the sources of information to quantify torture came from adding up the number of reports to authorities, investigations, trials, and sentences. However, these sources often underreport the phenomenon.

Methodology to measure torture or ill treatment in Mexico

In 2016, the National Institute for Statistics and Geography of Mexico (INEGI) conducted the National Survey of Population Deprived of Liberty (ENPOL). The objective was to generate statistical information on the experience of the criminal procedure and internment of a population deprived of freedom for 18 years and more, as well as their socio-demographic and socioeconomic data, legal-criminal background and their expectations after being released.

The data obtained from the ENPOL allow for a good approximation to the phenomenon of torture or ill-treatment3 in the context of the criminal process, given that it collects information from more than 58,000 people deprived of their liberty in prisons in Mexico.

This survey gathers a variety of data on the experience of people deprived of their liberty and is the best instrument available to measure and dissect the phenomenon of these illegal practices in the context of the criminal process. In this regard, it is important to mention that the Committee against Torture examined the seventh periodic report of Mexico in 2019 and not only mentions that the results from ENPOL are serious in terms of torture and ill-treatment, but also recognizes the efforts of the Mexican government to modify its policies and procedures to improve the protection of human rights, such as adopting the survey, and recommends ensuring the periodic implementation of ENPOL and the publication of its results.4

Using the ENPOL from 2016, the Word Justice Project (WJP), with the support of the German Agency for International Cooperation (GIZ), designed a methodology to measure the prevalence of torture or ill-treatment during criminal proceedings in Mexico. According to this analysis, from 2006 to 2016, 79% of the persons deprived of liberty in the country were tortured or ill-treated during their detention, transfer or in custody of public prosecution authorities. 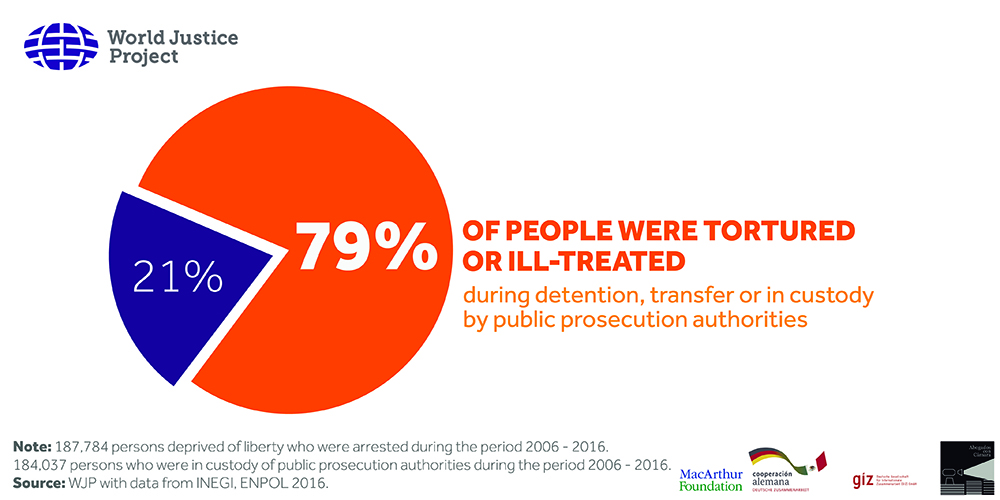 Tortured or ill-treated persons reported having been subjected to various types of assault, including threats of false charges or to harm their families, undressing or blindfolding them, hurting their families, suffocating them, kicking them or punching them, beating them with objects, burns, electric shocks, crushing of parts of their bodies, stab wounds, firearm injuries or having been forced to have unwanted sexual activity. 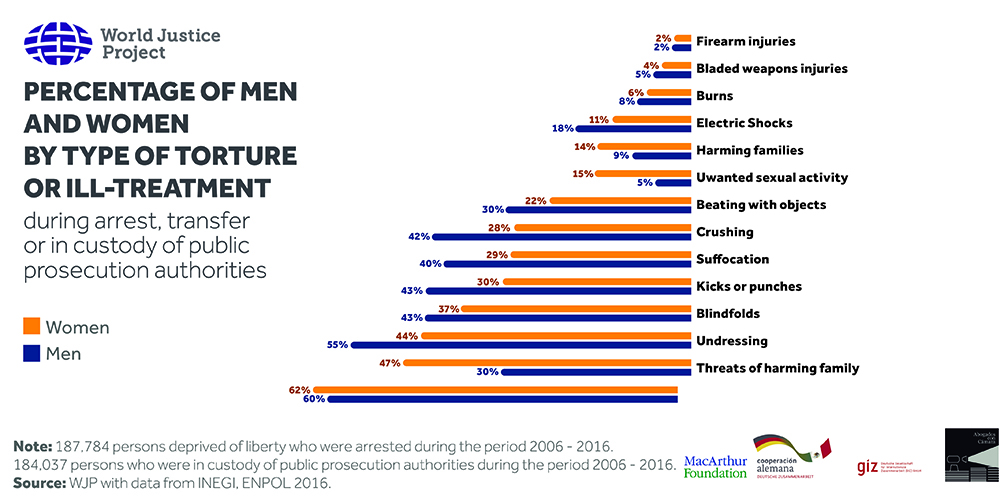 During the same period, the states with the highest frequency of torture during arrest, transfer or in custody of public prosecution authorities are Tlaxcala and Aguascalientes, while the states with less frequency are Durango and Nayarit. 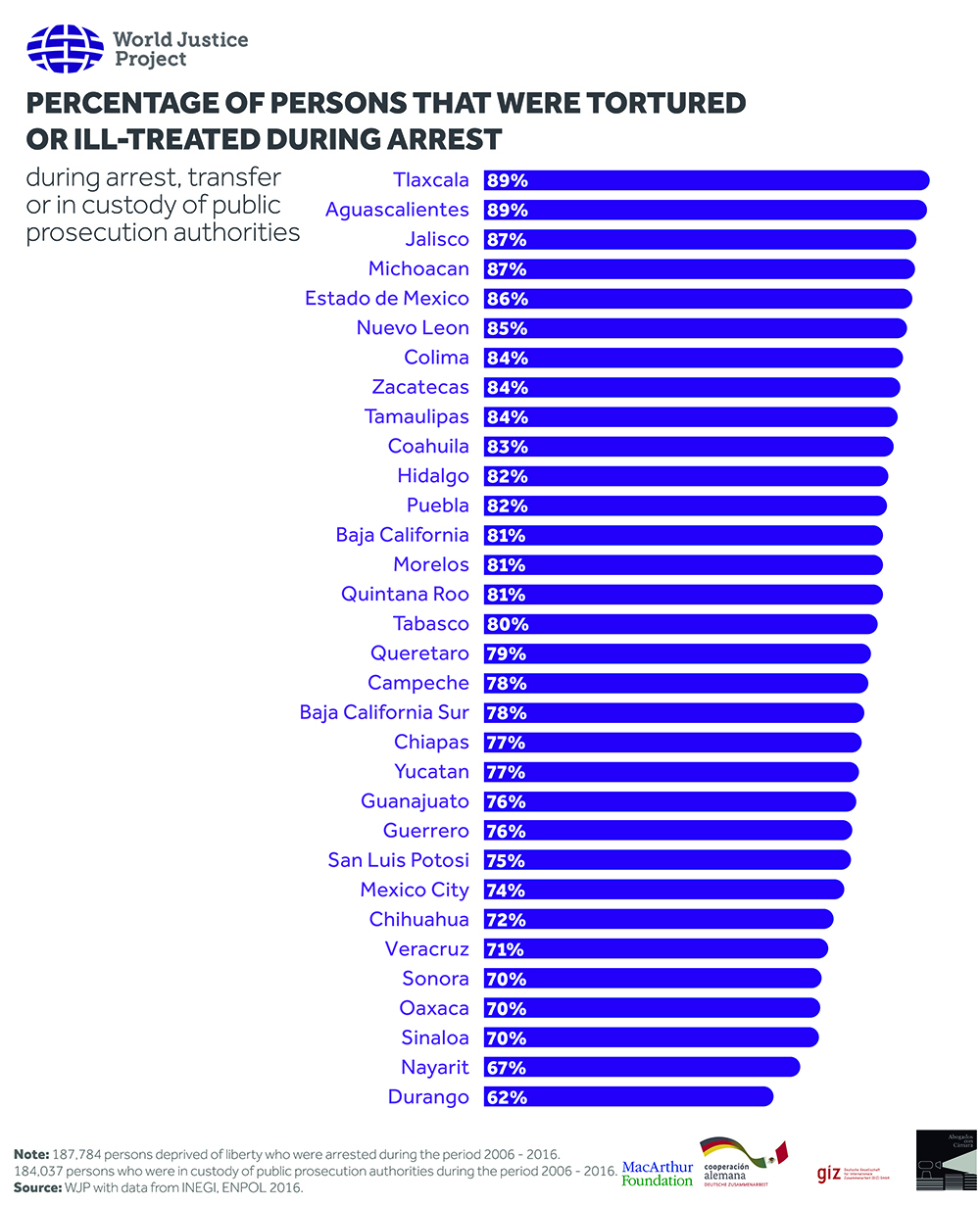 As noted, torture and ill-treatment are highly frequent in criminal proceedings and constitute a serious violation of due process in Mexico. Undoubtedly, this weakens the reliability of the Mexican criminal system, since these practices are associated with involuntary confessions and forced testimony in which any citizen can be guilty. However, these illegal practices continue to be used as an "investigation technique."

The use of torture is absolutely prohibited by international law, in any context and at any time. However, the practice of this illegal behavior is widespread in several contexts, especially in criminal proceedings. Torture or ill-treatment is often used for criminal investigation purposes or as an intimidating means.

Torture or ill-treatment must be replaced not only by good and best practices of investigation but also by the regulation of all acts of police investigation such as detention, inspection of persons or places, body search, interview with witnesses, etc. Laws and norms define to a large extent the interaction between the authorities and the arrested during arrest, later in the custody of public prosecution authorities, and in the prison centers. If these conditions are modified by changing the rules, then torture and ill-treatment can be reduced and prevented.

1 Torture is any act that causes a person severe pain or suffering (physical or psychological) to obtain information or a confession, punishment, intimidation or coercion, or for any reason based on any type of discrimination, when said pains or sufferings are inflicted, provoked or consented by a person that is exercising public functions.

3 Torture and ill-treatment are two different phenomena. According to the Inter-American Court of Human Rights, the main criterion to distinguish torture from ill-treatment is the intensity of suffering. However, the intensity of suffering is relative, requires a case-by-case analysis and corresponds to the judicial sphere. ENPOL does not allow to distinguish the intensity of the aggressions committed against persons deprived of liberty, but it does allow to distinguish those justified aggressions from those that are not justified in any circumstance. That is, it is possible to make an approximation about the aggressions that were illegal, although it is not possible to establish the cases that constitute one or the other type of criminal behavior, so the statistical findings will refer jointly to "torture or ill-treatment."

Driving the Global Conversation on the Rule of Law

In 2019, the World Justice Project and our research products were featured in top media outlets around the globe, citing WJP Rule of Law Index scores, new research on access to justice and the global justice gap, key convenings for the justice agenda, and more.