Spotlight on "Riverine People and the Right to Full Reparation"

In the weeks following the 2019 World Justice Forum, WJP has been pleased to highlight winning World Justice Challenge projects in turn. These winners represent the top projects in a global competition to identify, recognize, and promote good practices and successful solutions to improve access to justice. This week, we discuss insights of the "Riverine People and the Right to Full Reparation" project from Instituto Socioambiental in Brazil.

Thank you to the team at Instituto Socioambiental for detailing the work and impact of this important project.

Can you describe the project in its most simple terms?

The project aims to provide technical advisory to riverine families displaced by the construction of the Belo Monte dam and to ensure advocacy strategies to promote the recognition of their collective rights, especially cultural and territorial rights, by the national state.

The project ensured a broad articulation with local partners, scientific community, governing bodies and federal public ministry that resulted in the recognition of riverines as a collective subject of rights, inaugurating an unprecedented human rights reparation strategy and access to justice in the context of implementation of large infrastructure projects in the Amazon region.

Why was this project so necessary?

The riverine people, a traditional non-indigenous Amazonian population displaced by the construction of Belo Monte dam, were not recognized as a collective subject of rights, therefore their territory and way of life were not included in the compensation plans regulated by the Brazilian environmental licensing process. The environmental licenses established the company obligations with local communities, but there was no specific action aimed at maintaining the specificities of riverines territoriality and way of life, causing the dispersion of the families and the rupture of their economic and social arrangements.

The riverines were plundered from their traditional territory, where they lived for generations, and removed to urban outskirts, away from the river and the forest, central for the maintenance of their livelihood. With their collective rights denied, the riverines faced the negation of their identity and even the possibility of continuity of their way of life. The families began to struggle for survival with increasing difficulty to provide the basics for their maintenance, in a context of aggravation of illness and violence.

Can you tell us about the positive human impact the project has had?

The project, by strengthening the social organization of local communities, made possible the creation of a Riverine Council, an entity that officially represent them. The recognition by the Brazilian state of the riverines as a collectivity, resulted in the company legal obligation to guarantee their territorial rights and, above all, their right to return to the banks of Xingu River.

Today, 300 families recognized as traditional dwellers of Xingu river by the Riverine Council, about 1500 people, conquered  the right of return to the river banks. The Riverine territory proposes an innovative model of resettlement defined by the local communities. While awaiting the implementation of such a territory, the riverines will receive a symbolic monthly monetary value as compensation until the families can finally resume their traditional way of life.

What has made this project so effective? 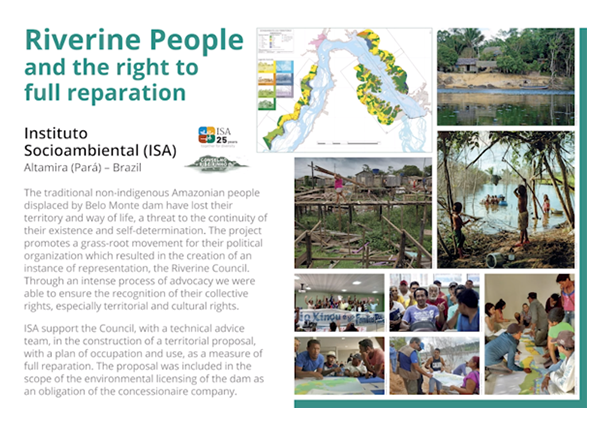 The project resulted in the formulation of a reparation proposal whose starting point was the expectations, needs, and traditional knowledge of local communities. ISA supported the self-recognition process of the families and the elaboration of a collaborative mapping of the areas required to guarantee their return to places closest as possible from the original communities and the consolidation of a collective resettlement.

The elaboration of this territorial map enabled a wide discussion among the displaced families, becoming a fundamental tool for collective decision-making to ensure the resumption of the traditional dynamics of use and circulation, and the reconfiguration of domestic groups and social networks, as well as the definition of areas for familiar use, collective use and environmental conservation.

The association between traditional knowledge and scientific knowledge was fundamental for the accuracy of information, ensuring that the map of the riverine territory became a reference within the environmental licensing process and the main tool for negotiation between the Riverine Council, national state and the company.

It was also fundamental for the effectiveness of the project that articulation with academic institutions took place. For example, the Brazilian Society for the Progress of Science (SBPC) gave technical support for the qualification of the local communities demands. Partnership with Federal Public Ministry, that has also ensured that the riverine reterritorialization became a legal right. ISA provided all of the advocacy support for the consolidation of this articulation.

How can the approach of this project be applied in other parts of the world?

The approach of the project can be replicated in contexts where forced displacement caused by large infrastructure projects or other causes occur. We developed a methodology of action whose main social impact is to bring into light the protagonism of marginalized and excluded social groups.

The main injustices, violations and inadequacies in process of forced displacement or resettlement, or in the formulation and planning of reparation strategies, can be reduced with the effective participation of the affected population in all the steps of the projects. An important lesson of this project is that local communities hold the key information that should guide the formulation of policies and programs in complex contexts involving forced displacement and ecological changes. The experience of people who better know the socio-ecological dynamics of territories, rivers, and forests is essential to qualify projections and models of the impacts caused by infrastructure projects and environmental disasters, as well as to plan actions to mitigate such impacts.

We developed, in almost five years of work with these families, efficient methodologies for a grass-root approach aimed to strengthening social organization and creating instances for political representation; collaborative mapping for territorial demarcation, identification of ecosystems and participatory planning of resettlement.

What is next for this project?

In the coming months, the right to return will be finally achieved. The expectation is that resettlement will start in July and by the middle of next year all 300 families will be settled in the riverine territory.

The Riverine Council will face new challenges, the first of all is the legal formalization of the institution, a condition to assume autonomy to build a proper network of partners and sponsors. This will require the continuity of technical and legal advice for the purpose of formalizing the entity and structuring administrative mechanisms.

To ensure the effectiveness of the institution it will be necessary to strengthen its social base of support, a premise to guarantee the protagonism of the riverines in the management of their territory and proper representation of the families' expectations. The continuity of this grass-roots work will require financial support, since logistics in the Amazon region are costly and it will be necessary to make frequent visits to each family.

In the initial phase of implantation of the riverine territory it will be up to the Council to define with local communities the plan of use and occupation of the territory, fundamental to promote the co-management and the preservation of natural resources of common use. The second step is the support for the organization and consolidation of economic alternatives that will guarantee local communities' well-being, especially through sustainable agriculture and the commercialization of non-timber products.

In addition, the Council will be the main collective actor to ensure the implementation of education and health services, able to serve all families resettled.

Our participation in the World Justice Forum was an opportunity to learn about initiatives that have in common the goal of guaranteeing access to justice in different contexts, understanding common issues, and learning other strategies that certainly could inspire and improve our performance. The promotion, by the organization, of the role of civil society and local communities in the formulation and implementation of such mechanisms, with different actors, strengthens these initiatives both nationally and internationally.

Winning the World Justice Challenge, besides being an honor, brings a important visibility to a project located in a context of great challenges for the preservation of the Amazon and the rights of non-indigenous traditional peoples. In this sense we will use part of the prize in the production of a documentary for a wide circulation that will tells this story: the forced displacement of the riverines from their traditional territories and the articulation to ensure the recognition of their collective rights and their return to the banks of Xingu River, an innovative case of reparation of social and ecological impacts caused by large projects.

The other part of the prize will be used to support the legal formalization of the Riverine Council, the institution that represents local communities, in order to guarantee their autonomy in the prospecting partners and funds that will be essential for the consolidation of their territory and the well-being of resettled families.

The World Justice Project lost two leading champions for our rule of law cause with the passing last week of Justice Ruth Bader Ginsburg and William H. Gates, Sr., both Honorary Chairs of the Project. We were honored by their longstanding involvement in our work and commit ourselves to making the WJP a worthy part of their legacy. We share here our memories and tributes to their work.

Fundamental Rights and the COVID-19 Pandemic

This policy brief is part of a multidisciplinary initiative from the World Justice Project to expand knowledge of the relationship between public health and the rule of law, and to identify measures to tackle the twin crises of the COVID-19 pandemic and the rule of law where they intersect.

For the past twenty-six years of its post-Soviet history, Belarus, controlled by Alexander Lukashenko, has seen many affronts to justice and the rule of law – from politically motivated murders to routine falsifications of voting protocols and figures. The Belarusian political crisis capturing the world's attention today is part of a larger story in which key dimensions of the rule of law may help us understand the drivers of change.