Rebuilding Trust: Strengthening Rule of Law in the United States

Confidence in accountability for U.S. public officials plummeted from 2016 to 2021, according to World Justice Project (WJP) surveys.

Would a high-level official pay a price for pocketing public money? Would a politically connected person be held responsible for a non-violent crime? The answers increasingly became no among the general public and legal experts.

This year, the United States finally turned a corner on its overall WJP Rule of Law Index score after sharp declines in the preceding five years, but it still has much lost ground to regain.

In recognition of this challenge, the WJP is embarking on a new U.S. campaign to strengthen rule of law and “rebuild trust.” Co-founder and Board Chair William Hubbard announced the effort at a recent rule of law briefing cosponsored by the American Bar Association Cornerstones of Democracy Commission.

“We want to promote the best practices for strengthening the rule of law,” Hubbard said. “We will be working and looking for partners to build capacity and support local leaders who stand up for rule of law principles.”

The event highlighted U.S. findings from the 2022 WJP Rule of Law Index, insights from the Carter Center on U.S. electoral integrity, and recommended actions Americans can all take to advance the rule of law.

Mirroring global authoritarian trends, one of the biggest factors to pull down the U.S. rule of law score in recent years was a weakening of constraints on government power. WJP Chief Research Officer Alejandro Ponce demonstrated the relative impact of a variety of causes for the declines year over year, including steep drops in Index subfactors that measure checks on power by independent auditing and the judiciary. 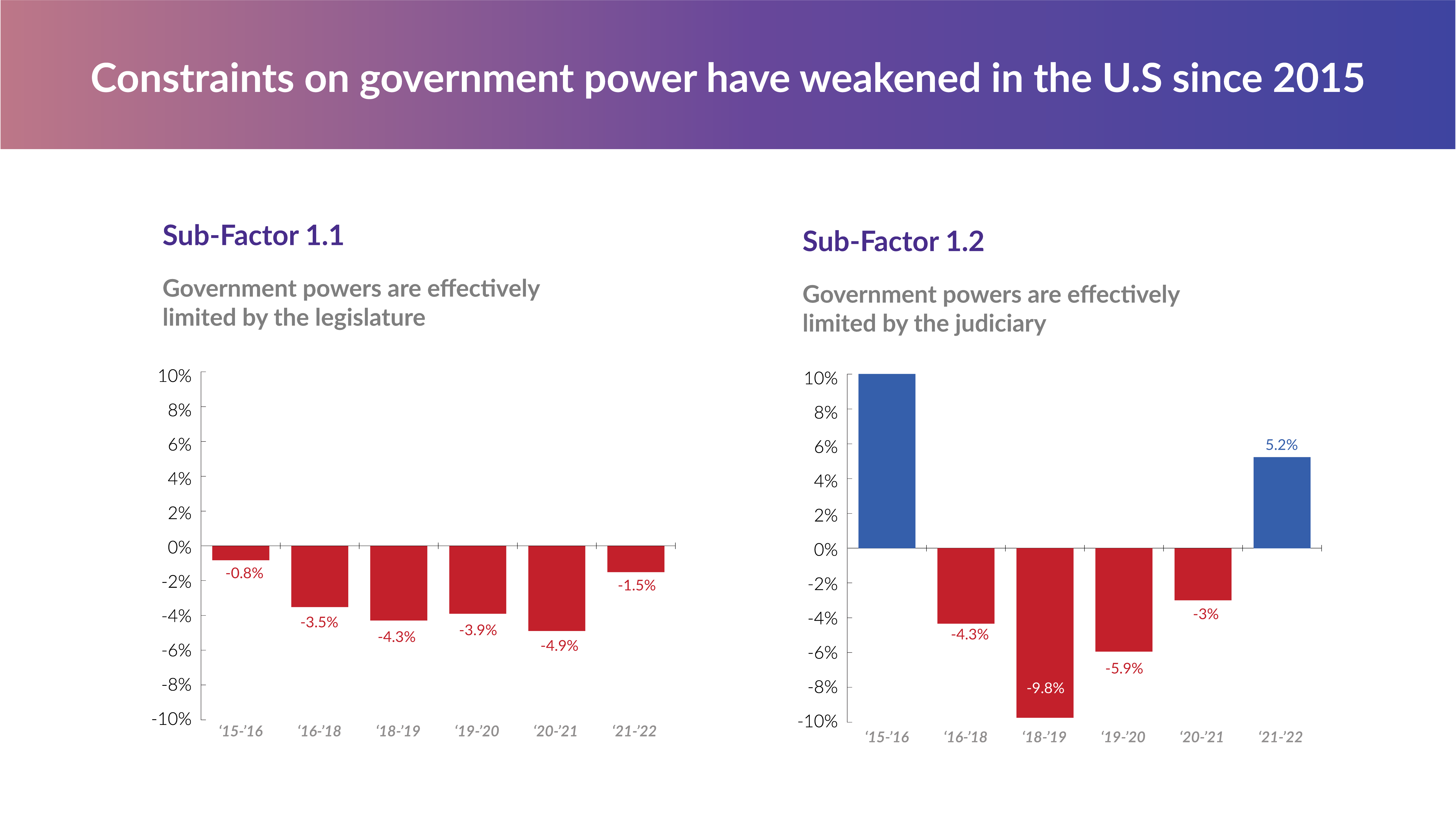 After experiencing recent rule of law declines similar in magnitude to Myanmar, Nicaragua, Hungary, and the Philippines, the United States this year reversed its five-year losing trend to become one of the most improved countries in the 2022 Index.

“Interestingly, three out of the five countries that improved had elections and changes in administration, which could explain this change, but there is still a long way to go,” Ponce said.

One significant area of concern is the U.S. electoral system itself, according to David Caroll, director of the Democracy Program at The Carter Center.

“It's long been apparent to us at the Carter Center that the United States had several areas where we’re not meeting standards, frankly. And we're far behind many other countries,” said Caroll. He noted that the lack of a national election authority, discriminatory voter ID rules, and partisan redistricting are all factors that threaten election integrity in the United States.

Discrimination is another longstanding threat to U.S. rule of law. For instance, Ponce noted that the United States ranks 103 out of 140 countries and jurisdictions when it comes to equal treatment and absence of discrimination. And while the U.S. scores have begun to recover overall, the country remains significantly behind where it was in 2015 on fundamental rights, limited government powers, access to civil justice, and effective criminal justice.


Deborah Enix-Ross, President of the American Bar Association, noted that one way forward for improving rule of law in the United States is to strengthen civics education.

“Disinvestment in civics education is what you're seeing reflected in the WJP Rule of Law Index, which is a lack of understanding of American rights, of government institutions, and of government processes and how they’re supposed to work.”

And while the legal profession can lead in this area, she said, it’s important for all stakeholders—faith leaders, business leaders, journalists, and more—to collaborate and work together in order to strengthen the rule of law.

You can watch the full discussion below.