On December 4th, an advance, unedited version of the UN Secretary-General’s synthesis report on the post-2015 agenda was released: “The Road to Dignity by 2030: Ending Poverty, Transforming All Lives and Protecting the Planet.” The report will be formally issued in the six official languages of the UN on December 31st.

Sustainable Development Goals (SDGs) are now under development and consideration to replace the Millennium Development Goals, which were adopted in 2000 and are set to expire in 2015. In the synthesis report, a new conceptual framework for the emerging SDGs is offered, organized around six “Essential Elements” as seen in the following graphic from the report: 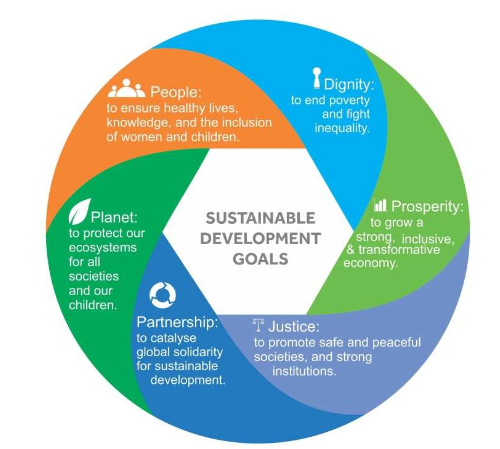 “The World Justice Project welcomes the Secretary-General’s Synthesis Report,” said executive director Juan Carlos Botero. “We agree with the report’s call for 'an enabling environment under the rule of law,' which is foundational to sustainable development.”

Following is the report’s detailed description of the goal of Justice:

"Justice: to promote safe and peaceful societies, and strong institutions

77. Effective governance for sustainable development demands that public institutions in all countries and at all levels be inclusive, participatory, and accountable to the people. Laws and institutions must protect human rights and fundamental freedoms. All must be free from fear and violence, without discrimination. We also know that participatory democracy, free, safe, and peaceful societies are both enablers and outcomes of development.

78. Access to fair justice systems, accountable institutions of democratic governance, measures to combat corruption and curb illicit financial flows, and safeguards to protect personal security are integral to sustainable development. An enabling environment under the rule of law must be secured for the free, active and meaningful engagement of civil society and advocates reflecting the voices of women, minorities, LGBT groups, indigenous peoples, youth, adolescents and older persons. Press freedom and access to information, freedom of expression, assembly and association are enablers of sustainable development. The practice of child, early and forced marriage must be ended everywhere. The rule of law must be strengthened at the national and international level, to secure justice for all.

79. We need to rebuild and reintegrate societies better after crises and conflicts. We must address state fragility, support internally displaced persons and contribute to resilience of people and communities. Reconciliation, peacebuilding and state-building are critical for countries to overcome fragility and develop cohesive societies, and strong institutions. These investments are essential to retaining the gains of development and avoiding reversals in the future."

For more information on the rule of law, please visit our page on the topic.