An update from the Modelling Kivalina project, incubated with support from the WJP and developed by a multidisciplinary group of researchers called The Centre of the Earth. Learn more about their program here.

In July 2013 we travelled to Kivalina, a barrier island situated off the northwestern coast of Alaska, and home to four hundred Inupiaq people. The village is under threat due to shoreline erosion that has been induced by the effects of climate change.

While Kivalina is one of the first cases of potential climate displacement in the United States, governmental agencies and legal forums are failing to address this crisis, and thus, the village is now seeking alternatives to develop new strategies of negotiation for a safe, self-determined and sustainable future. 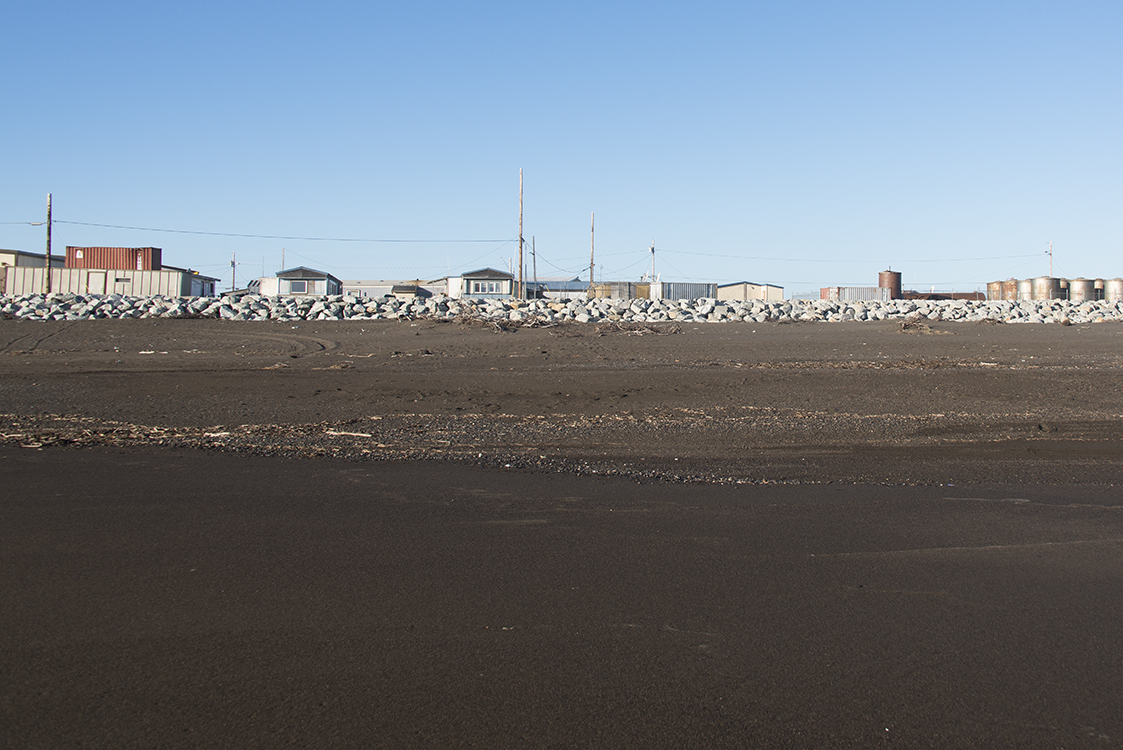 [Boat trip up the Wuuliq river and possible relocation sites]

In the Arctic, natural and human rights are inextricably linked, given that environmental issues, such as climate change, have a direct impact on fundamental human rights. For native Inupiaq people in northwestern Alaska, the US legal system has abstracted the ways the challenges facing these communities have been represented mainly through its use of complicated legal terminology.

This has resulted in a partial and uneven distribution of knowledge when it comes to the Rule of Law. The Modelling Kivalina Project is an attempt to address the problematics of representation when visualizing environmental forces, abstract legal concepts, and social and political relations. 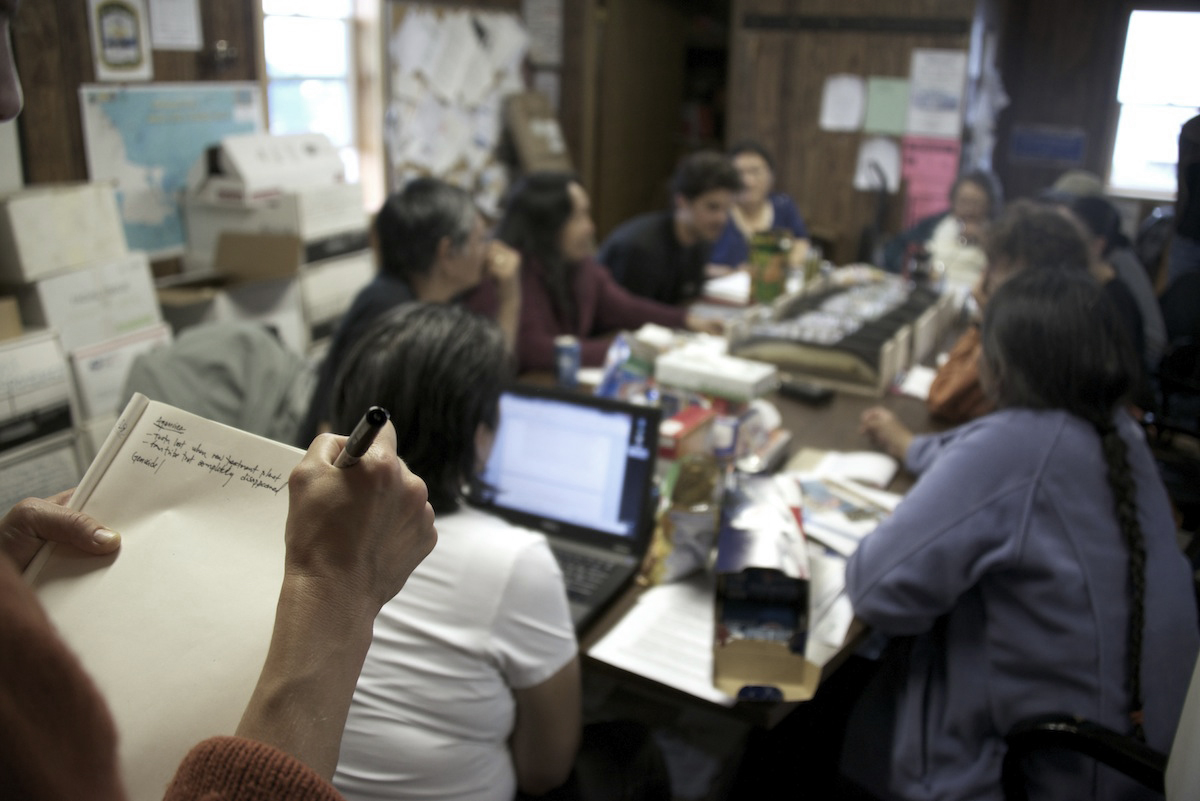 [The Model in conversation with Kivalina City Council]

In 2008, the village filed a lawsuit against 23 oil and energy companies, including Shell, BP, and ExxonMobil for damages to their natural environment. On May 20th of this year, the US Supreme Court denied a request for the decision to be reviewed, upholding the ruling of the Court of Appeals for the Ninth Circuit’s ruling in favor of the energy companies.

In the United States, equal access to the civil justice system is limited and is often subject to discrimination. Inupiat people are among the many different ethnic minority groups in the U.S. who do not have equal access to the civil justice system. Indigenous peoples of Alaska have a unique legal status as state-chartered corporations, which limit the jurisdiction and sovereignty of tribal government, subsistence rights, and self-determination. 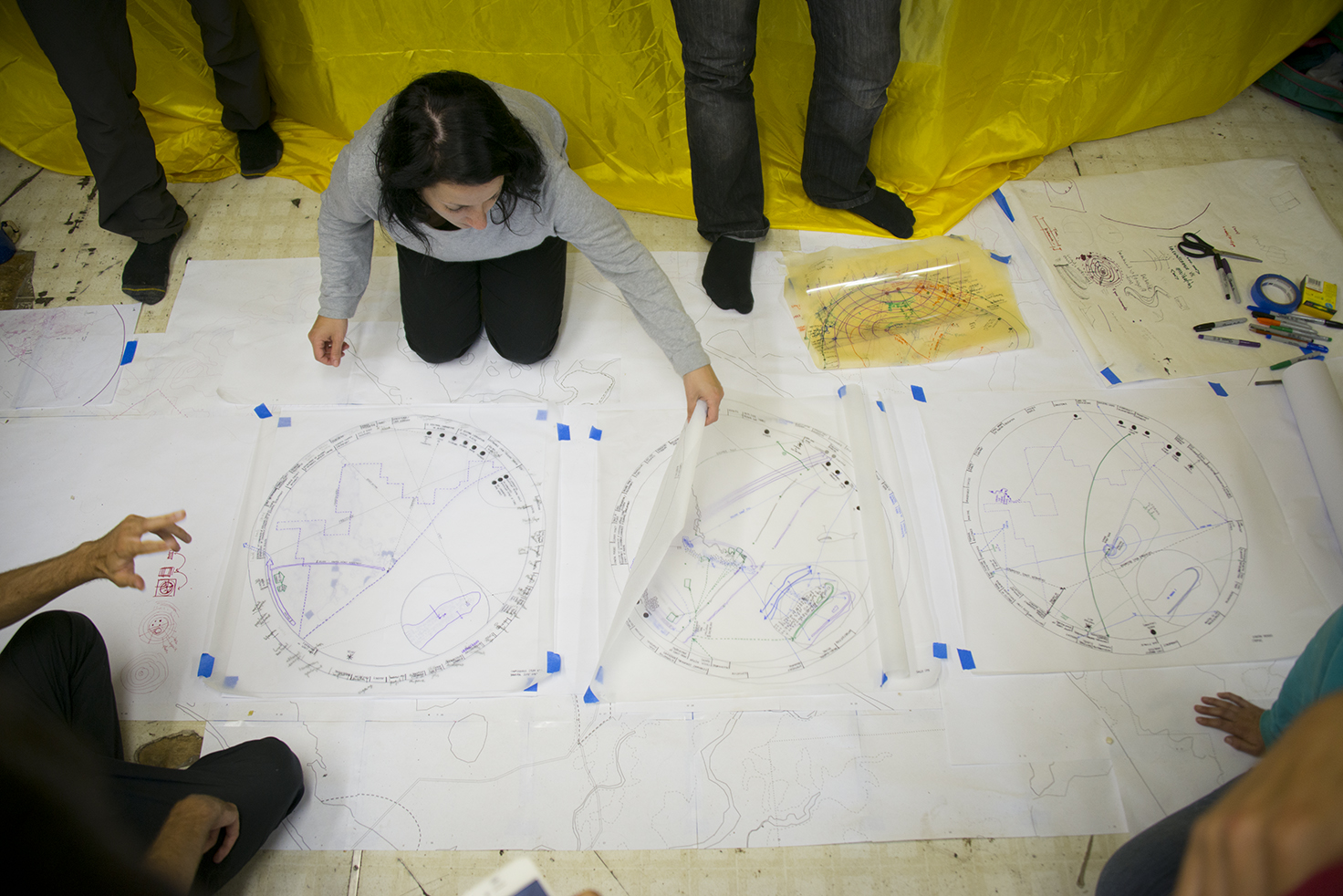 The issues that face Kivalina raise important questions regarding the promotion of the Rule of Law in a world where climate change is exacerbating existing inequalities and contributing to increasing numbers of displaced people and cultures. The project aims to visualize the political, legal, and environmental transformations shaping the present and future conditions of the island by means of a working physical model.

In Kivalina we have interviewed 20 residents, of which many hold official positions in the city and tribal council. All of the interviews were recorded on our model, which was transformed and redesigned by each interviewee, a process that exposed and outlined the different approach each agency, local governing bodies and the resident of the village have towards territory, federal and indigenous law and the relocation of Kivalina. 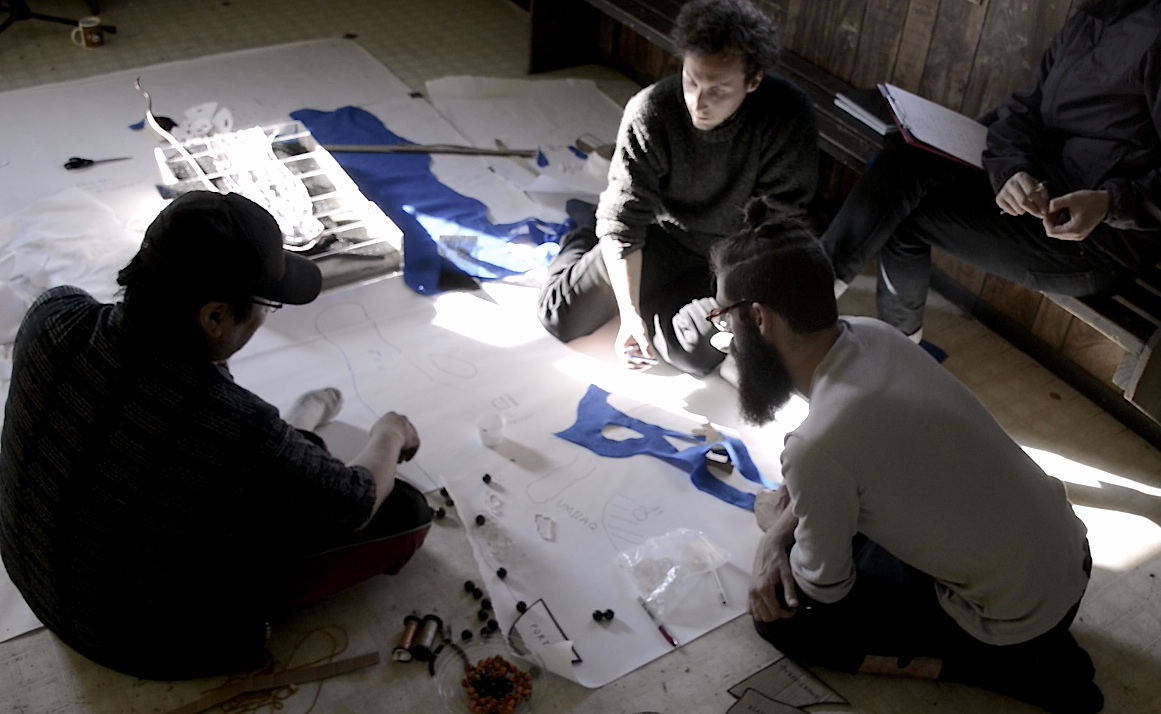 [The Model in conversation with Joe Sr. (Kivalina resident)]

Using the recorded interviews we conducted during the trip, we started to generate a series of maps that show these different understanding and agenda agencies have been promoting and the language that they have put into use. The maps were presented in the village in an open house event and in an open presentation at the Alaska Pacific University and received a lot of interest and great responses. Back in London we are currently developing these maps, analyzing the recorded interviews and working on a new model that will continue the work we have started, creating a space for discussion and negotiation between the different agencies, stakeholders and Kivalina. 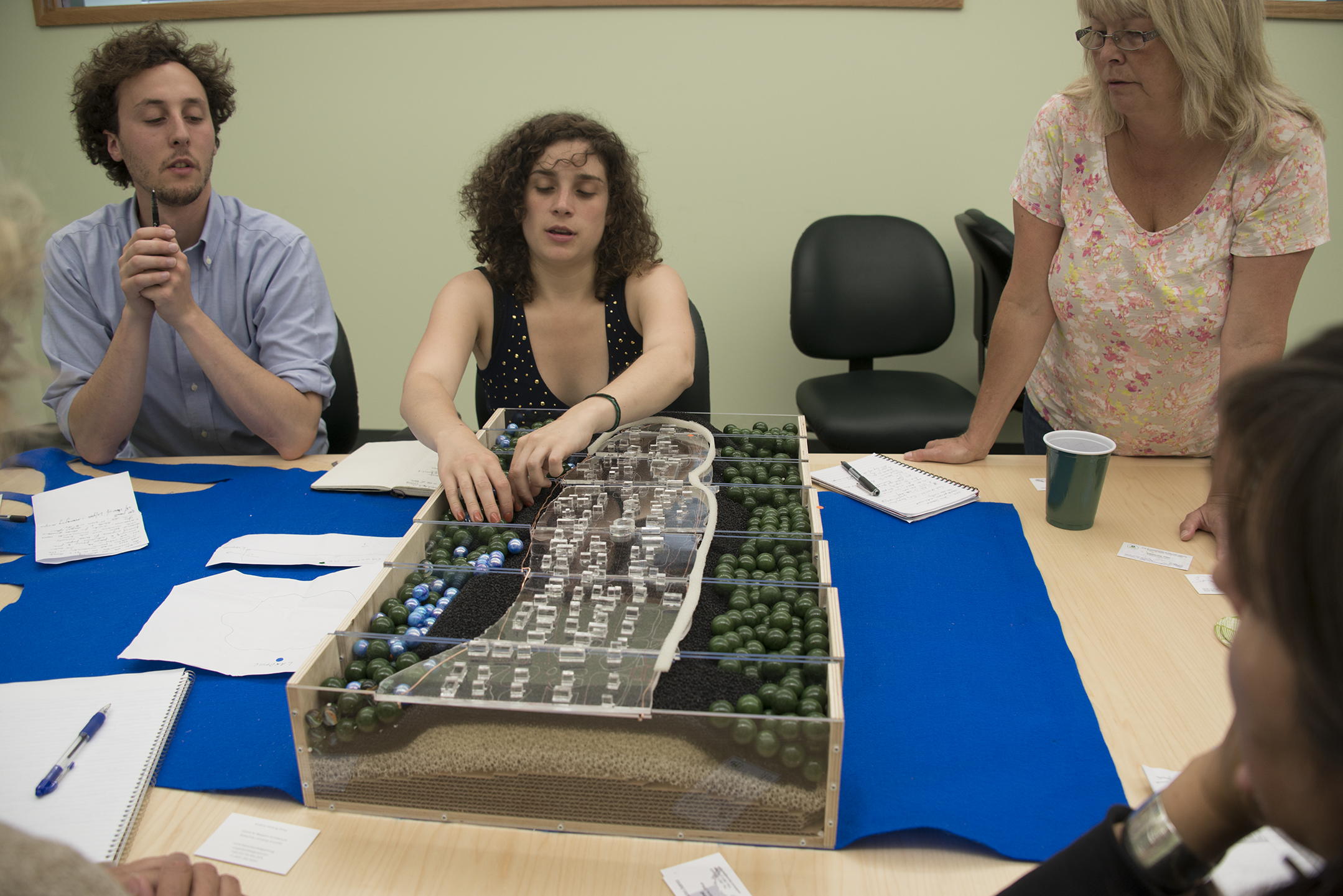 [The Model in conversation]

Through the act of rendering these legal and environmental transformations visible, the project aims to provide an alternative platform for the discussion, negotiation and planning of a just living environment. We hope that this work will support the formation of a common language among all the involved parties. 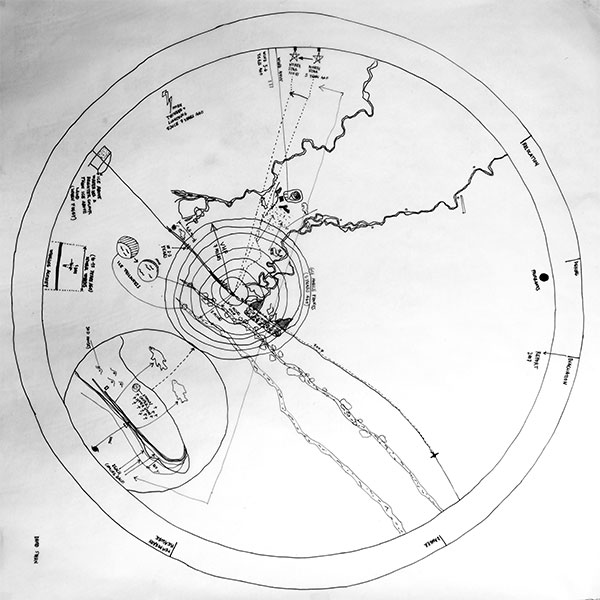 Click here to learn more about this WJP Grantee Program.

Photo Credit: Modelling Kivalina / The Centre of The Earth