As we continue to celebrate the social, political, and economic progress made by women all around the world, as well as acknowledge the remaining challenges, take a look at an organization working to level the playing field for women - both literally and metaphorically.

Based in Sao Paulo, Brazil, the GUERREIRASPROJECT (GP) is an international movement that uses football to promote gender justice and to create more equitable and sustainable ways of thinking, relating and doing. On IWD, WJP asked team leader Caitlin Fisher to tell us a little about the wonderful work GP is doing to expand equity and opportunity to the young people they mentor.

What is the GP approach?

The project is made up of a team of athletes, artists, academics and activists who, together, use multimedia, research and community campaigns to stimulate gender dialogue, empower female players, challenge discrimination and promote social justice.

What are some of GP's activities?

We work through three main channels: 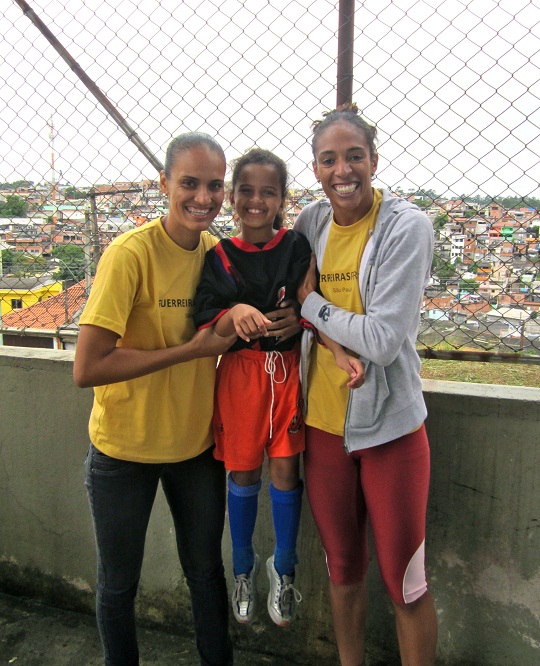 We work with professional female football players in Brazil to encourage women and girls' involvement in sport, challenge gender and racial prejudice, and promote safe and democratic attitudes through physical activity and dialogue. These women go into the community and lead workshops where they tell their stories, discuss the 'preconceito' (prejudice) within the women's game, and create safe spaces for youth to reflect on and give voice to their experiences in and around women's football and beyond.

We use narratives, still imagery, ambient sound, and film from women's football to open up space for critical reflection around gender norms. The GP launched its multimedia initiative at an international exhibition at the Brazilian Embassy in Berlin, Germany during the 2011 FIFA Women's World Cup.

As a collective of gender advocates, researchers, writers, and academics, we are individuals concerned with issues of gender justice and with a commitment to opening up spaces around gender, yet not limited to this. We are also concerned with issues of social justice more broadly and we work to build strong connections with intersecting movements and to continue to devise strategies for joining forces along lines of sexuality, race, class and nationality.

What impact does GP have?

The impact of the GP is to contribute to the eradication of negative gender norms and build solidarity in doing so, thereby addressing the social injustices driven by such norms - including reducing gender-based violence, tackling homophobia, and promoting gender equality in the workplace.

Who benefits from GP's work?

In our community campaign in Rio de Janeiro, Brazil called 'Moving Minds, Bodies and Fields', we use women's football to challenge harmful gender norms and promote empowered minds, bodies and communities in order to address gender-based violence. The project uses women's football as a tool to challenge people's thinking around mena's and women's traditional roles in society, and enables participants to question how deeply embedded gender norms can affect decisions linked to power, control, expression, and violence in our everyday lives. It also serves to empower women and girls, and loosen up space for boys and men to identify with more flexible and pluralistic definitions of masculinity. The project pursues its objective through capacity building with professional female football players who are positioned as ambassadors of sport and women's empowerment in the community. They carry out workshops with local youth, using football as a platform to promote gender equality and to teach about women's rights and resources. The act of seeing these women as strong empowered, talented individuals acting in a space that has been traditionally reserved for men can serve to uproot some deeply held assumptions, biases and prejudices about women's capabilities and women's expected roles. It can also open up space for critical reflection on traditional views of manhood among boys, further challenging gender inequalities. The GP recently received funding from the Avon Institute Brazil in partnership with UN Women and a Brazil-based women's fund called Fundo ELAS to launch this community campaign.

In our pilot program in Recife, Brazil we partnered with love.fútbol, an international NGO that mobilizes under-served communities to build accessible and safe spaces for youth to play football to launch a campaign called "You Can't Be What You Can't See". Through this partnership the focus is on promoting safe physical spaces owned by the community as the foundation into which our female ambassadors can enter and become visible. This visibility has proved to be extremely powerful as a psychological space - after our return visit to one of the community programs, we discovered that the number of girls participating had increased significantly and they had approached their coach to request that an all-girls team be formed. Because of what these young girls saw, heard and felt that day with the presence of these female players, they now have an all-girls team that trains every Saturday morning.

Learn more about the origins of GUERREIRASPROJECT in Caitlin's great TED talk, "The body image of female athletes."

Caitlin is currently based in São Paulo, Brazil. A former professional athlete, she now works with a group called WomenChangeMakers and leads the Guerreiras Project.

Following her professional soccer career in Brazil, Sweden and the U.S., she joined the Nike Foundation as a Portfolio Specialist, contributing to launch of the Girl Effect. In 2010, with an MSc degree from the Gender Institute at the London School of Economics (LSE), she headed back down to Brazil to reconnect with her old Santos teammates and develop the Guerreiras Project. This past year she carried out ethnographic work for the project on a Fulbright Fellowship in Recife and São Paulo, focused on gender, the body, and economic development. She recently delivered this TED talk on the subject in São Paulo. Caitlin received her BA with Honors in Biological Anthropology from Harvard University in 2004.