Checks, Balances, and Constraints on Government Powers in Mexico

Checks and balances in Mexico

A system of checks and balances, or constraints on government powers, is necessary to strengthen the rule of law in any country. These may be visible in different ways, such as journalistic investigations that reveal cases of corruption or the sanctions imposed by a judge when a governor does not follow the constitution, for example.

Checks and balances are essential to prevent abuse of power, and to sanction government officials when they break the law. They also foster the accountability of our representatives, which means that they comply with the obligation to inform about their decisions and justify them publicly. This supervision enhances public services, develops trust in government and promotes the fulfilment of citizens' needs.

Effectiveness of constraints to government powers

The Mexico States Rule of Law Index 2018, which is developed using a General Population Poll (GPP) responded by 25,000 citizens and Qualified Respondents Questionnaires (QRQs) completed by 1,500 legal experts Mexico, reflects citizen's perceptions about the effectiveness of these check and balances to monitor the actions of state governments. One of the eight factors included in the Index, Constraints to Government Powers, measures whether checks and balances limit the actions of government officials, particularly governors, mayors and other authorities of the states’ executive branch, and if they are accountable for their actions.

This factor is disaggregated into six sub-factors that measure public opinion about the effectiveness of various types of constraints to government powers: institutional, such as state legislatures, the judiciary, comptrollers, auditors and ombudsman agencies; and non-governmental, such as civil society organizations and the media. 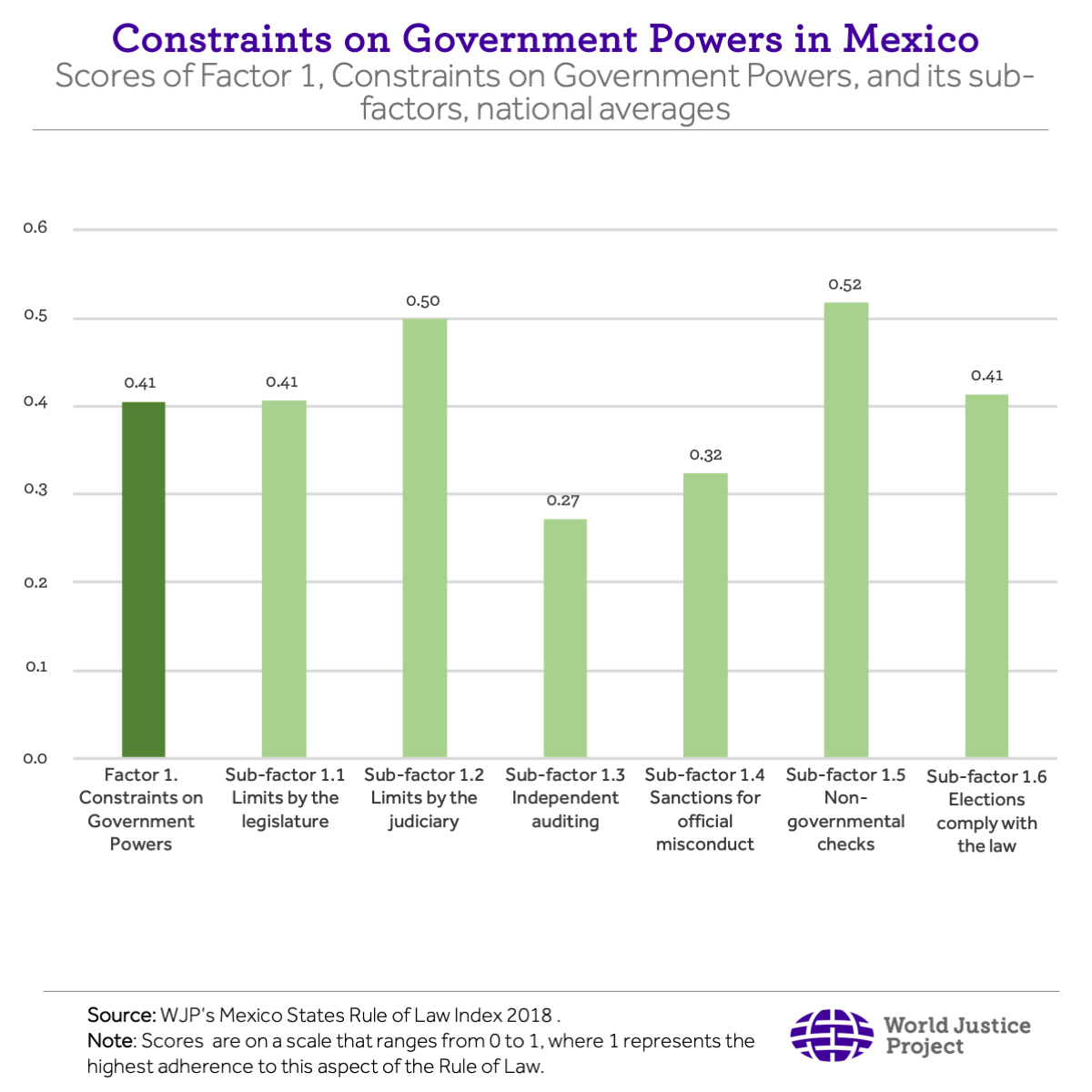 Non-governmental checks are the most effective in Mexico

The results of the Mexico Index show that the strongest checks in the country are non-governmental, that is, civil society and the press. Sub-factor 1.5, which measures the effectiveness of this type of constraints to government powers, has a higher score than the other five sub-factors (0.52, on a scale of 0 to 1, where 1 represents strongest adherence to this aspect of the rule of law). On one hand, the states that stand out in this regard are Nuevo León (0.62), Yucatán (0.60) and Aguascalientes (0.60). On the other, the ones with the lowest scores are Baja California Sur (0.43), Guerrero (0.36) and Veracruz (0.36). 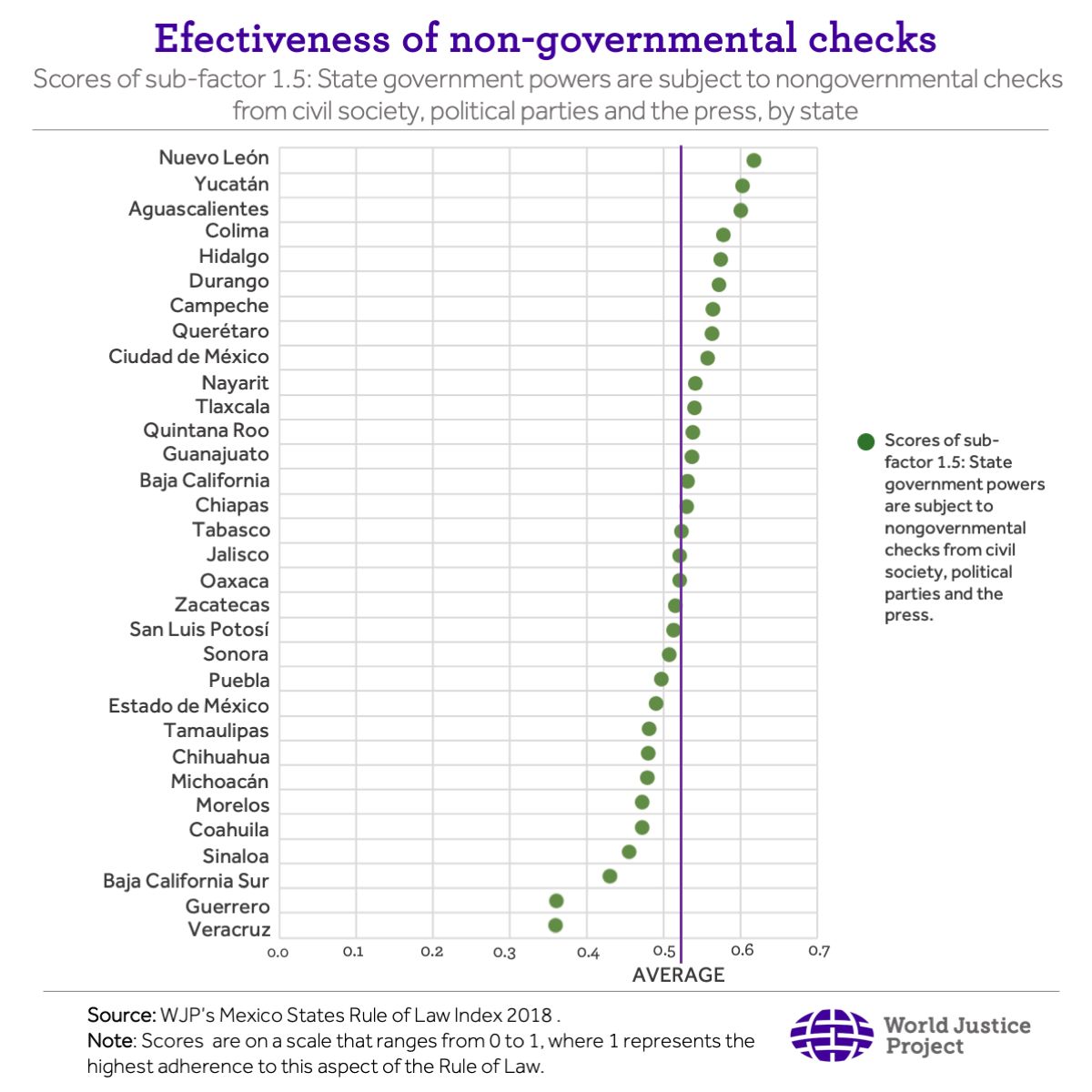 This means that civil society organizations, citizens, political parties and the media act as the strongest checks to state governments in Mexico, given that in most states they actively participate in politics, monitor the actions of state officials and demand accountability of elected representatives. Furthermore, they protest when they disagree with government actions. However, there are persistent challenges such as intimidation of activists and attacks on press freedom in states with more insecurity.

The rest of the sub-factors of Factor 1 are focused on measuring the effectiveness of institutional checks and balances. These are related to the separation of powers, which is enshrined in article 49 of the Mexican Constitution and is part of the limiting structure of power to prevent its abuse and to guarantee individual freedom. This implies the assignment of certain competences to different bodies and the allocation of legislative, executive and judicial tasks, to create mechanisms of separation, control, collaboration or mutual surveillance. (Villanueva Gómez, 2014)

The Mexico Index shows that the strongest institutional constraint to government powers is the judiciary. Sub-factor 1.2 has a national average of 0.50, while local congresses (sub-factor 1.1) have 0.41 and oversight and control agencies (sub-factor 1.3) have 0.27. The states with the highest scores related to the effectiveness of the judiciary as a check to government powers are Zacatecas (0.62), Baja California (0.59) and Morelos (0.56). On the contrary, the states with the lowest scores are Baja California Sur (0.42), Guerrero (0.37) and Veracruz (0.34).

These results suggest that in some states the judiciary is effective in limiting government, and that authorities abide by the decisions of the courts. However, there are states with problems such as lack of judicial independence, as well as pressures and personal or political motivations in judges’ decision-making. 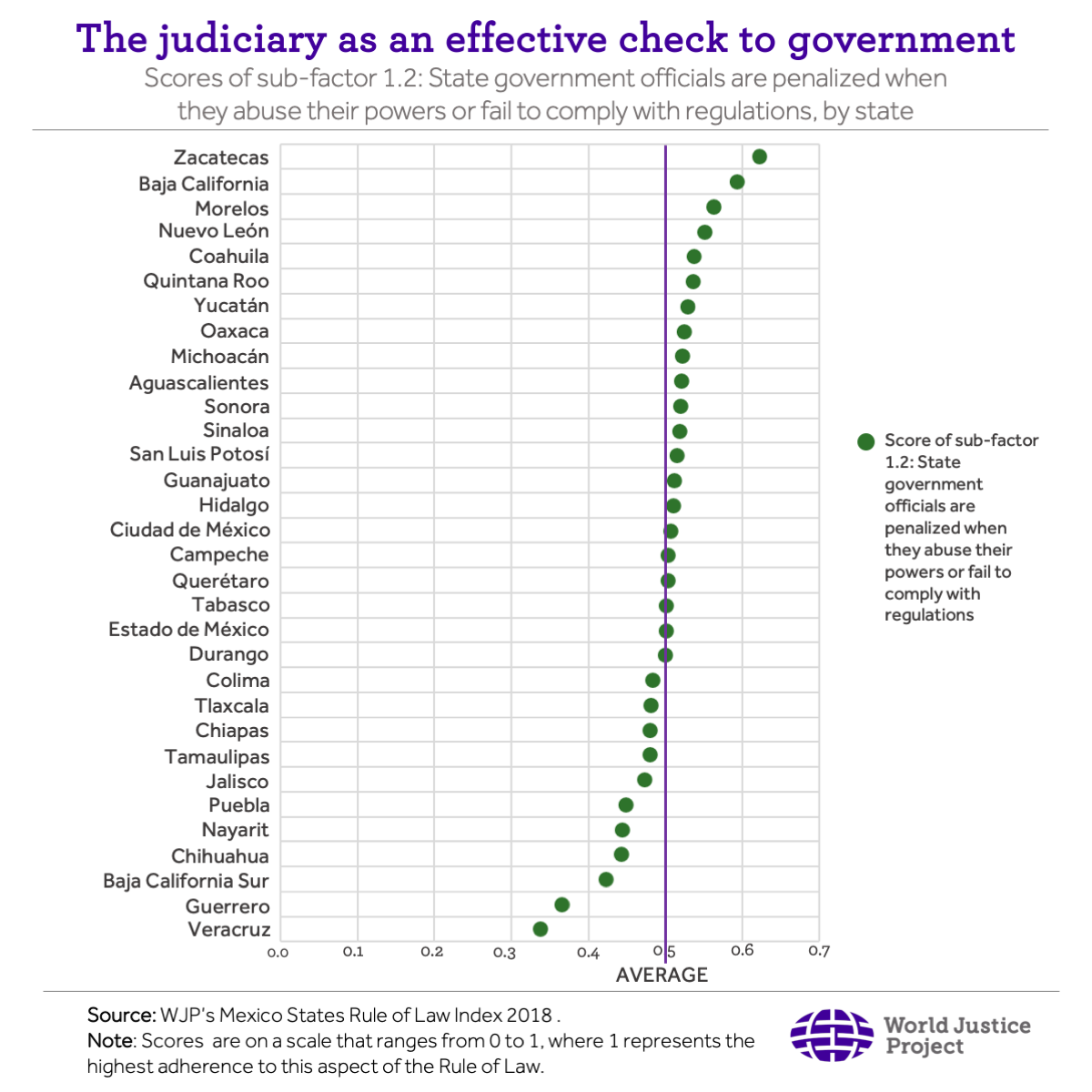 The data show weaknesses of local legislatures in their task of limiting state governments, due in part to opposition politicians who cannot always express their opinions without fear of reprisals. Likewise, oversight and control agencies have the lowest score (0.27), due to the perception that government officials frequently ignore the reports of bodies such as the principal auditing body of Mexico (Federal Superior Audit Office or Auditoría Superior de la  Federación) and local ombudsman agencies.

Similarly, the score of 0.32 of sub-factor 1.4 (Government officials are sanctioned for misconduct), reflects the perception that government officials are rarely penalized when they break the law. Also, the score of 0.41 of sub-factor 1.6 (Elections are free, clean and transparent), shows that elections in Mexico have problems such as government and organized crime intervention, as well as deficiencies of electoral courts in resolving controversies.

These results highlight the weaknesses in the system of checks and balances in Mexico, which inhibit the accountability of representatives, generate opportunities for corruption and threaten individual freedoms. There are studies that reaffirm the existence of authoritarian enclaves in Mexico, as a heritage of decades of a single party rule (Lawson, 2000). These enclaves can weaken the rule of law at the national level. For example, authoritarian subnational governments can negatively influence national elections, when mayors induce votes for a specific candidate. (Benton, 2011)

Weakness of checks and balances is not an exclusive problem of Mexico. Although the scores of the global WJP Rule of Law Index and the Mexico States Rule of Law Index are not comparable, data show interesting patterns. In a sign suggesting rising authoritarianism, Factor 1 declined in more countries than any other factor worldwide in the WJP Rule of Law Index 2019, and that 60% of countries show a decline since the 2015 edition of the Index. (World Justice Project, 2019, p. 18) An example of this is Poland, which declined to 0.58 in 2019, from 0.77 in 2015. Moreover, Mexico scored 0.47 in 2019, from 0.51 in 2015.

Strengthening the rule of law requires strengthening this system of checks and balances, for example, by exercising freedom of expression by participating in demonstrations or supporting a free and independent press. We are all part of this system, which is essential for government accountability under the law.