Beatrice Mtetwa: Victory in Zimbabwe's Courts, Work to be Done 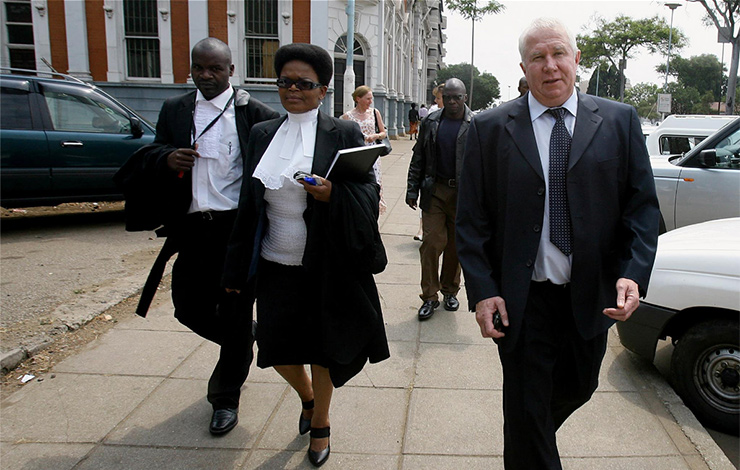 Director and Producer Lorie Conway gives us an update on the path ahead for Beatrice, Zimbabwe, and for the documentary film Beatrice Mtetwa and the Rule of Law.  The film was screened at the World Justice Forum IV in the Hague in July, as well as co-screened with WJP in Seattle and Washington, DC.

“This woman has guts, she never stops fighting, no fear. I`ll hand it to you, Beatrice. You get a salute from me…”

That comment, coming from a reader of one of the hundreds of articles written about the arrest, trial and acquittal of Beatrice Mtetwa in 2013, sums up the outpouring of international support for Zimbabwe’s most famous human rights lawyer. Or, as some in the country would say infamous lawyer, given that many of her defendants are those opposed to the Mugabe government and get in trouble more for being on the wrong side of the regime than the law.

On March 17th, 2013, the day after a national referendum overwhelmingly approved a new constitution showcasing democratic rights, it was Beatrice herself who felt the wrath of the government—getting arrested for asking police to show her a search warrant as they entered her clients house.

While recording the police officers activities on her cell phone and loudly proclaiming that what they were doing was “unconstitutional, illegal and unlawful,” Mtetwa was jailed and subsequently charged with “obstructing justice” along with a host of 19 other charges, including calling the police officers “Mugabe’s dogs.” For eight days, Beatrice sat in jail, while two requests for bail were denied.

“I’m glad to have had the experience,” she told me recently. Adding, “I can now say I know what being in jail feels like and what the conditions are first hand.”

Family members brought her food, water, and blankets since none were provided; there was one toilet in the cell that she shared with 15 other women, built to accommodate less than half that number. Flushing the toilet was possible only outside the cell with guards often ignoring requests to do so. But they did allow Beatrice to meet with other prisoners who were asking for legal counsel, so she found herself working even while incarcerated.

Beatrice’s trial began in June, with Harare magistrate Rumbidzai Mugwagwa presiding. She pleaded not guilty to all charges, saying she was “just being used as the example” and, "there will be many more to follow.” Although legal representation was offered by the International Bar Association, and defense lawyer Harrison Nkomo was at her side, Beatrice played a large role in defending herself. Many of her colleagues and friends attended the four month trial which included several delays and cancellations. Mtetwa disputed claims that she had interfered with the duties of the police, who, ironically, did not have a search warrant at the time they were seizing items from her clients home.

During an interview for the film about her work upholding the law in Zimbabwe, Beatrice said this about the country’s twisted justice system: “I often go to court knowing I’m going to lose a case not because the law is against you but because the politics of the case is against you.” Lawyers and human rights workers in Zimbabwe call it “persecution by prosecution” and Beatrice Mtetwa’s trial is a perfect example of the regime’s attempt to hamper critics and opponents of Robert Mugabe’s government, especially ahead of the disputed July elections won by Mugabe. “They wanted to completely destabilize my practice…to slow me down, to hamper me from doing my work,” said Beatrice.

In a report titled, Zimbabwe: Agenda for the Government 2013-2018, issued this past November by Amnesty International, they noted that in spite of Zimbabwe’s new constitution, human rights and democratic rights continue to be abridged through the arbitrary arrests of civil society groups and activists. The report stated that many arrested were unlawfully detained on spurious criminal charges, made to spend long periods in jail, and denied bail before facing drawn out trials that often resulted in the state abandoning the cases, or the activists being acquitted.

On November 26th, the day of Beatrice Mtetwa’s acquittal, defense lawyer Harrison Nkomo said the “state knew all along that she was innocent.” In her ruling Magistrate Mugwagwa said “From the testimonies of state witnesses, there is no evidence she obstructed their duties.” Beatrice felt vindicated. “This was a set-up and obviously the court has seen through it. The contradictions were many and varying,” she said standing outside Harare’s courthouse. “I’m free at last.”

Producing the film and getting to know Beatrice along the way has been a real privilege. There have been challenges. From meager funding to balancing the desire to distribute the film widely, including in Zimbabwe, along with the need to protect the safety of those who participated in the film. But with the support of our main funder the US Institute of Peace--and the support of the World Justice Project, who hosted the premiere screening of the film followed by an incredible concert by Thomas Mapfumo, whose music is heard throughout the film--the documentary has managed to make, I believe, a ripple of difference.

In choosing to build the film around Beatrice, we thought she would be a compelling figure. She is that, and more. She’s inspiring, smart, courageous, and ethical. We have been struck at each screening of the film by the number of people who come up to us and tell us how inspired they are by Beatrice. She’s one of the role models for a new Africa, and an example by which others—young and old, male and female—can measure their country’s leaders, and ask of them the same standards of conduct she exemplifies.

Currently, the documentary about Beatrice Mtetwa and her courageous work in Zimbabwe, titled Beatrice Mtetwa and the Rule of Law, is being broadcast through Fox Africa and other distribution and screenings are taking place around the world, including New Zealand, Australia, Europe, the US, and Canada.

With a small grant from the London based Bertha Foundation, thousands of free dvds of the short version of the film are being distributed to schools, libraries, community groups and law societies through partnerships with NGO’s and foundations like the Open Society Initiative of Southern Africa. Request for the free dvds have come from various groups located in Tanzania, Botswana, South Africa, Sierra Leone, Malawi, and many other African countries.

Ms. Lorie Conway is an independent producer and filmmaker for Boston Film & Video, a company she founded in 2000. Some of her past work includes: “The Incredible Voyage of Bill Pinkney,” for which she received the Peabody Award and the Cable Ace Award, and “Fortunate Son,” which received the Columbia University duPont Award. Lorie Conway’s works for public television includes: The Life & Times of John Kenneth Galbraith, Boston: the Way it Was, The Jews of Boston, and Fabulous Fenway, a commemorative history of Fenway Park, America’s oldest major-league ballpark. Lorie Conway has also produced numerous short films and videos for Harvard University’s Kennedy School of Government, the Nieman Foundation, EngenderHealth, a leading international non-profit, and others. For 12 years, she was a staff producer for CHRONICLE, a nightly news-magazine program.

Beatrice Mtetwa and the Rule of Law, Conway’s current film seeks to highlight the importance of the rule of law by focusing on attorney Beatrice Mtetwa’s efforts in Zimbabwe. In spite of beatings by police and being arrested in March, 2013 she has courageously defended in court those jailed by the Mugabe government—peace activists, journalists, opposition candidates, farmers that had their land confiscated, ordinary citizens that had the courage to speak up. Through interviews with Mtetwa and some of her defendants, the film will tell the story of what happens when rulers place themselves above the law and why defense of the rule of law is a crucial step in the building of a civil society. Although Mtetwa’s arena is Zimbabwe, her message and bravery are universal.

Rebuilding Trust: Strengthening Rule of Law in the United States

Confidence in accountability for U.S. public officials plummeted from 2016 to 2021, according to World Justice Project (WJP) surveys.  Would a high-level official pay a price for pocketing public money? Would a politically connected person be held responsible for a non-violent crime?  The answers increasingly became no among the general public and legal experts.  This year, the United States finally turned a corner on its overall WJP Rule of Law Index score after sharp declines in the preceding five years, but it still has much lost ground to regain.    In recognition of this challenge, the WJP is embarking on a new U.S. campaign to strengthen rule of law and “rebuild trust.” Co-founder and Board Chair William Hubbard announced the effort at a recent rule of law briefing cosponsored by the American Bar Association Cornerstones of Democracy Commission.