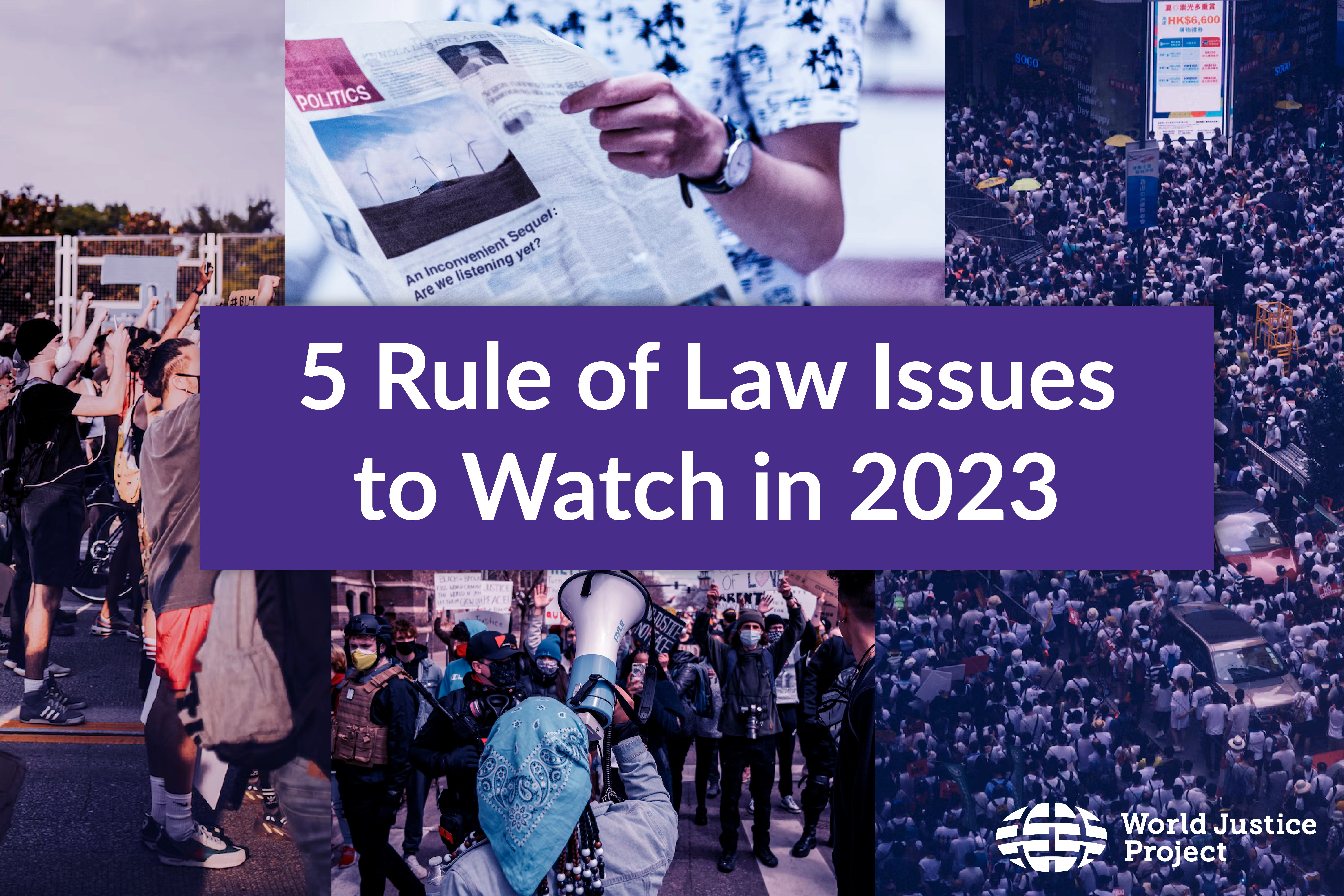 More than 4.4 billion people live in countries where the rule of law weakened last year, according to the World Justice Project (WJP) Rule of Law Index. Will these trends continue? Here are five rule of law issues to watch in 2023.

#1 – Checks on Rising Authoritarianism in Europe

Rising authoritarianism has contributed to a decline in the rule of law globally for the last five years and experts will be watching this trend closely this year. The European Union (EU) has been a leader in responding to these trends, setting standards for rule of law in its member states and monitoring and enforcing compliance. Look to see whether, and how, judicial independence, media pluralism, and other checks on authoritarian tendencies are upheld in the region. This is an issue of particular concern in Poland and Hungary.

Poland passed a controversial law in 2018 that reduced judicial independence in the country. This law coincided with annual declines in Poland’s “Constraints on Government Powers” score in the WJP Rule of Law Index from 2019-2022. Under pressure to comply with EU standards, Poland updated the law last July. With parliamentary elections approaching in October, a polarizing contest over rule of law issues could get worse.

Hungary is one of a handful of countries globally to experience a decline in the rule of law every year since 2015 according to WJP data. Viktor Orban was re-elected as prime minister in April 2022 and continues to consolidate power. Like its near-neighbor Poland, Hungary has run afoul of the EU for not meeting the regional bloc’s rule of law standards. It is unclear whether either country will be able to fully assuage the EU’s rule of law concerns.

Disinformation laws are high on the list of rule of law concerns for the Asia Pacific region and this topic was the focus of a discussion at WJP’s recent Asia Pacific Justice Forum in Jakarta. At the height of the COVID-19 pandemic many Southeast Asian countries used so-called “fake news” laws to make it illegal to spread inaccurate information about the virus. Enforcement of these laws has since broadened across the region to essentially ban criticism of governments. Free press advocates continue to monitor how these laws are applied and whether additional countries propose similar legislation.

#3 – Strengthening Rule of Law in India

India, the world’s largest democracy, ranks 77 out of 140 countries and jurisdictions in the 2022 WJP Rule of Law Index and ranks 94 out of 140 on fundamental rights. After experiencing a 4-year decline in the rule of law as measured in the Index, Prime Minister Modi’s administration announced its intention to strengthen the country’s WJP Rule of Law Index ranking and has established a cross-government committee to form an action plan. WJP’s team have briefed representatives of the government on the Index methodology and findings, identifying key areas for potential improvement.

The world’s eyes have been on Brazil since October’s closely contested presidential election. The country appeared to undergo a peaceful transition of power, until supporters of former President Jair Bolsonaro stormed the seats of Brazil’s democratic institutions on Jan. 8, drawing parallels to the Jan. 6 attack on the U.S. Capitol. As authorities seek to hold those responsible for the destruction accountable for their actions, can Brazil improve its rule of law score for the first time since 2016?

In neighboring Peru, 2022 ended with the country’s president attempting to dissolve congress to prevent an impeachment vote over corruption allegations. Those efforts failed, and he was removed from office and subsequently arrested.  Since then, the country has been plagued by anti-government protests and violence, claiming dozens of lives.  Peru has had six presidents since 2016, with no president completing a full term in office since that time. Human rights observers are concerned about the situation and any further escalation. Peru has experienced a four-year decline in the rule of law according to the WJP Rule of Law Index. Data the WJP collects this year will show whether that downward trend will continue for a fifth year.

#5 – Rebuilding Trust in the United States

Last year, the rule of law improved in the United States for the first time in five years, according to the 2022 WJP Rule of Law Index.  But the data show U.S. rule of law remains well below its 2016 score. Areas requiring attention include constraints on executive power and media freedoms, which have eroded in recent years, as well as longstanding weaknesses relating to discrimination and access to justice. Elections have emerged as a critical proving ground for U.S. rule of law, and while the 2022 midterm Congressional elections proceeded without incident, preparation for the 2024 presidential contest will remain a rule of law focus in the coming year. Through its recently launched “Rebuilding Trust” campaign, the WJP is working to highlight U.S. rule of law weaknesses and promote effective responses at the local, state, and national level.

Follow us on social media and stay in touch for more rule of law news and insights.