In Brazil, Female Warriors Fight for a Level Playing Field

Aline “Pelle” Pellegrino still recalls the day she gave up her passion—as an Olympic athlete—for a job that offered reliable pay and a break from the daily discrimination she faced. In her 16 years as a professional soccer player in Brazil, including playing alongside world-famous “Marta” and winning an Olympic medal, Pelle had only one legal employment contract, and it was when she was 15 years old. Most of the time, she was paid under the table, and sometimes she wasn’t paid at all.

Even at an elite level, as the captain of the Brazilian women's national team, Pelle felt marginalized. “We had to buy our own gear and play on dangerous fields while [our male counterparts] got cleats, shin guards and uniforms.” The women athletes had to pay for everything, but they were often paid minimum wage and sometimes not even that.

Eventually, Pelle decided to leave the sport for good. But she faced a difficult realization: without any employment records, she wasn’t able to open a bank account, buy a car, or lease an apartment. “I had no proof of employment. I have two Olympic medals and women’s World Cup trophies at home, but on paper I looked like I had been a couch potato for 16 years.”

Pelle, along with American soccer player Caitlin Fisher, is one of the founders of the Guerreiras Project, a group of athletes, academics, and activists that use sport to create discussions around gender discrimination and access."Guerreiras” translates to female warriors in Portuguese, reflecting the struggle that many female players face in playing soccer.

The Guerreiras Project started in 2012 as a way for women players to share stories of prejudice they experienced and the fight they had to go through to play this sport. The project turned into an opportunity to use those stories to create change. After attending the World Justice Forum in 2013 to speak on a panel about sports and the rule of law, Fisher was inspired to include a rule of law focus to her work. The Guerreiras Project received a seed grant through WJP's World Justice Challenge to begin training 25 of Brazil’s top women soccer players as “ambassadors” to address gender discrimination and accessibility for women in sports. The pilot program also includes workshops for youth in major cities where some of the country’s future players will be recruited.

Thaís Picarte, Goalkeeper for the national women's team Centro Olimpico, is one of these ambassadors. Picarte remembers visiting a school in a poor neighborhood in Recife to conduct a workshop with 40 kids. The boys outnumbered the girls five to one. "These kids had never seen a professional female athlete," said Fisher. “When we asked them to name a player besides Marta, they couldn’t. When we asked if they had ever seen a female referee, they hadn’t.” The women players showed the children photos of top women athletes and women referees and watched the children’s faces light up.

“I had no idea how much impact this project could have until I went to that workshop,” said Picarte. After the workshop, the girls approached their coach and asked to start an all-girls team. Within two months, the Recife girls had a team of 22 training together every Saturday.

“The kids in these workshops see professional players and assume they must come from rich families. Then we tell our stories; that we come from the same poor communities. That our fathers didn’t want us to play. The children begin to identify with us, because their stories are the same. They see themselves in us and that allows them to see new possibilities, new futures. It is such a small thing but it can change the trajectory of a girl’s life.”

Brazil has broken through its glass ceiling by electing its first female president in 2010. But when it comes to the country’s most famous pastime, women have largely been left on the sidelines. FIFA, international football's governing body, estimates that 29 million women and girls play the sport worldwide. Brazil is home to about half a million women players, including world famous Marta Vieira da Silva, known simply as "Marta," who has five times been named FIFA World Player of the Year. But despite winning tournaments at the highest levels, decades of restrictions and gender discrimination have disenfranchised women from the football fields.

The sport was initially introduced to Brazil in the 19th century, and by the 1940s, there were women’s teams all over the country, with 40 women's teams in Rio alone. But that all came to an end in 1941 when the Minister of Education and Health passed a law making it illegal for women to play sports that were against their "nature." It took 38 years for the government to finally lift the ban on women's football in 1979, but the impact of the ban remains. According to the Brazilian Football Confederation (CBF), the country's top official football body, only 84 women's teams were registered for the 2013 professional season, compared to 229 men's teams.

Though the laws have changed, attitudes have not. Women who want to play soccer in Brazil are often discriminated against as non-feminine and called “big shoes,” a deragatory word for lesbians.

“Women’s futebol can’t make progress because of the prejudice against homosexuals,” says Fisher. “If you have short hair, many teams won’t accept you. They want heterosexy girls in tight clothes.” Indeed, FIFA's president caused an uproar in 2004 when he said that women soccer players would increase the popularity of their game if they wore tighter shorts. Fisher recalls receiving uniforms so tight-fitting the women couldn’t move their arms and had to send them back. The following year the women’s team was asked to pose naked for a calendar.

It's not just players who face these obstacles; female referees and sports journalists must overcome resistance to carve out a space for themselves in the realm of Brazilian soccer. Facing a history of legal prohibitions and gender discrimination, football, the major symbol of Brazilian culture, is still seen as a male space.

In 2004, Caitlin Fisher bought a one-way ticket from the U.S. to Brazil. She had been captain of her team in college and wanted to play professionally, but in 2003, the U.S. Women’s Pro League folded. Fisher saw no opportunity to continue her career. When she heard a rumor that a professional club was being formed in Brazil, she jumped on a plane. Women came from all over the country—some taking the bus for several days from the Amazon—to try out for the team.

Fisher made the team and joined Santos, one of the country’s most prominent futebol clubs and former home to Pele. But she soon discovered that although the women’s team had the same name and wore the same team jersey, the women weren’t allowed to eat in the cafeteria, play on the team’s field, or use the laundry room. “Sometimes we only had money to buy bread and butter or cheese—not much when you train seven hours a day, seven days a week. Our uniforms were the men’s old hand me downs. We had to wash them by hand, though the men’s team had a cleaning service. And we couldn’t use the Santos bus like the men’s team, so we walked 45 minutes to and from practice each day.” The women also faced problems with lack of pay and medical insurance, as well as sexual harassment. But nobody spoke up about the inequalities. They were afraid of the repercussions.

It didn’t matter. In 2012, the Santos women’s team folded to free up funds for the men’s salaries. “Santos said the money was needed to keep star player Neymar in Brazil, so they increased his salary tenfold and cut the women's team," explains Fisher. “It wasn’t Neymar’s fault. He tried to find the money from his sponsors. But one month of his salary (1.5 million Reals) would have covered all costs for the women’s team for a year.”

“We were supposed to be paid monthly, but we only got paid four times during the year,” says Beatriz “Bia” Vaz e Silva, another Guerreiras Project ambassador. “I only made 33% of the money I was promised. I am lucky that my dad could help me out, but many others on the team are supporting their families and they have to quit.” Guerreiras ambassador Picarte is in the same situation. Last year she learned that her team’s sponsorship was cut, and that her salary would be only half of what she was promised.

Fisher believes that paying players under the table without formal contracts is a deliberate way to keep women’s soccer informal so that soccer clubs don’t have to be accountable under the law. It’s an issue that is being researched by Moya Dodd, who chairs the FIFA Task Force for Women’s Football set up in 2013 to develop a vision and strategy for the future of women’s soccer. “Making the game truly accessible to females is a profound message to the world that no woman will be subject to discrimination or disadvantage because of her gender,” said Dodd. She is urging soccer authorities to set an example in the fight against discrimination. “In the world of football, it’s time for sexism to be taken as seriously as racism,” she said.

The Guerreiras Project has a tough road ahead. “People assume there is a low level of skill from women players, even though they have never seen a game,” says e Silva. Indeed, three male referees who declined to give their names for an interview stated that women were simply not as athletic as men. One of them posited that it was because women have less time to practice because they need to be home cooking and caring for children.

But a fan at a Centro Olimpico game in Sao Paulo, Daniel Perreira de Silva, felt differently. “I prefer women’s futebol,” said de Silva. “Nowadays futebol is geared towards a European audience. It’s very fast and aggressive, with lots of fake dives and fake injuries. It has lost the traditional grace of Brazilian futebol. But that beauty and grace is how the women still play.” De Silva believes others would like women’s games too, if they knew when and where they will be played. And getting support from the fans will be key for the Guerreiras.

Fisher is optimistic. More girls are starting to play football in Brazil, even as they struggle to get support at more competitive levels. The ambassadors, too, are feeling more positive. “I am in love with the Guerreiras Project,” says e Silva.“Now I dream of watching my daughter play.” 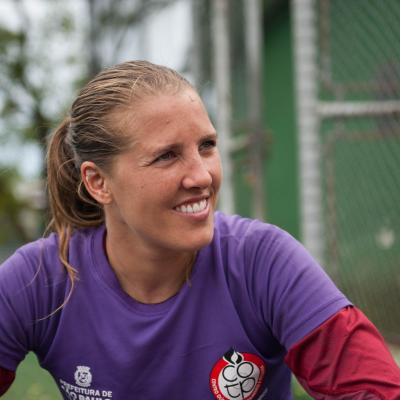 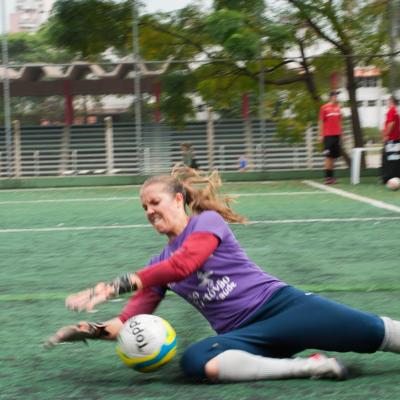 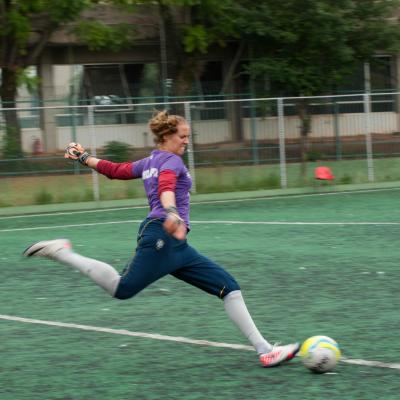 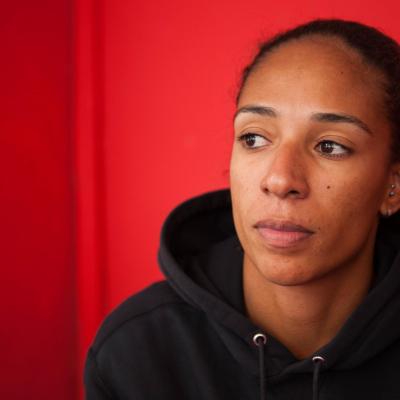 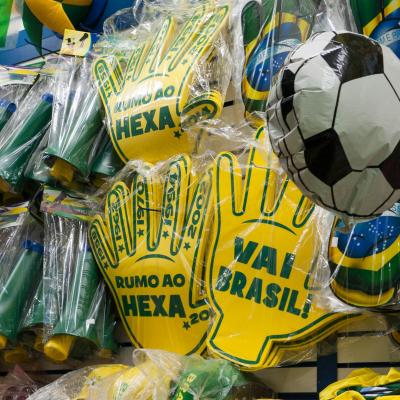 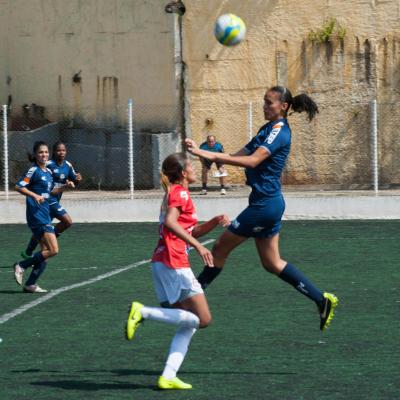 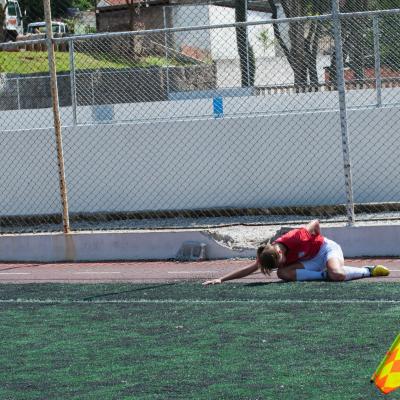 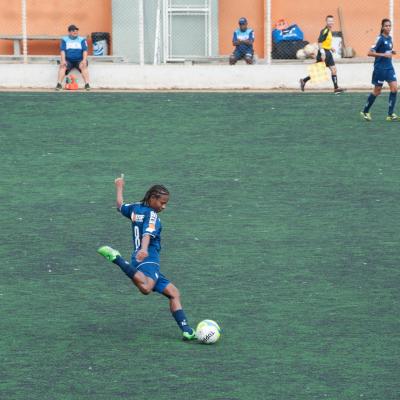 About This Photo Essay

This essay is part of an ongoing series documenting pilot programs incubated at World Justice Project (WJP) convenings and/or launched with WJP seed funding. Since its founding, WJP has provided network connections and over $1,000,000 in funding to 80+ pilot programs on five continents. These practical, community-led solutions to discrimination, corruption, violence, and more represent a broad cross-section of disciplines and approaches to strengthening the rule of law worldwide. Pilot programs are catalogued on the WJP website, where they can be searched by geography and issue area.