Overcoming Judicial Accessibility in Times of COVID-19 and Beyond

Problems such as universal judicial access, social accountability, and judicial inefficiency have been chronic in Ecuador. During the COVID-19 pandemic, these problems were expected to aggravate; however, the Constitutional Court developed and implemented the SACC (Automatized System of the Constitutional Court) whose main objective is to address judicial accessibility, enhance transparency, and improve efficiency when delivering constitutional justice. The SACC is a three-phase mid-term project. The first is already implemented and made a significant impact during the pandemic, since it allowed citizens from diverse backgrounds to engage in the most important processes of constitutional adjudication. The other two phases are under development and planning, respectively.

The quality of the judiciary in Ecuador is alarming. International rankings place the country at the lowest places in terms of public confidence, independence, and transparency. Within this context, the newly elected Constitutional Court found a myriad of chronic problems: (i) A considerable backlog of about 14,000 unattended files (a judicial process lasts between three to eight years, on average). This was correlated with a lack of an automated handling system; officers were processing files by hand. (ii) There were only two available offices to file documents before the Court. This meant that people must travel considerable distances or pay expensive legal representation to access justice. (iii) There was considerable opacity in the way that judicial files were processed. The lack of an official information channel made adjudication and the agility highly arbitrary, not to mention corruption scandals and accountability problems.

In Ecuador, the COVID-19 pandemic spread began in early March and had devastating effects on the economy and social conditions. The government declared a state of emergency and imposed strict lockdown and curfew measures. Although judicial services were partially suspended, there were a considerable amount of documents (11,265) filed during this period. Particularly, indictment filing increased dramatically during the state of emergency. People alleged a variety of potential human rights violations during the COVID-19 emergency—e.g. limitations to press freedom, lack of health care services for vulnerable people, lack of essential material for first-line sanitary personnel. In addition, the Court had to guarantee access to justice but within an environment that ensures social distancing. These problems and their exacerbation due to the COVID-19 pandemic had general effects on the citizens and users of the constitutional judicial system. This meant that the Court had to set up a working framework that guarantees access, transparency, and agility within the aforementioned context.

As a response to the aforementioned problem, the Court envisioned an integral solution: to adopt newer technologies to enhance transparency and accountability, and guarantee universal access to judicial services. We created the SACC (Constitutional Court Automatized System, by the Spanish acronym) and also developed a communications plan to boost it. The SACC is a software designed and developed in three phases. The first phase emphasized two major areas: technical production, and communications. Regarding the former, the team designed, produced, and corrected the online platform to (i) digitally submit documents (e.g. indictments, subpoenas, petitions, amicus curie among others), (ii) the digital repository where these documents can be accessed by search engines, (iii) the automatic and randomized allocation of cases to each judges' office, (iv) virtual hearings were set up to promote citizens' participation. Regarding the latter, a communications plan was developed to promote the use of the system and participation in hearings and help users with technical issues. Currently, the team is working on the second phase that spans the design and development of an automated management system to resolve the cases. This includes the digitalization of the process of admission and resolution of all the cases, as well as their legal notification. In addition, as part of this phase, we are designing and developing electronic tools to promote access from minorities, people with disabilities, and indigenous people (who speak different languages). On the other hand, the third phase will enclose the development of artificial intelligence to select cases that could create mandatory precedents.

So far, the SACC has had a positive impact, although we expect to enhance it in terms of access, efficiency, and transparency: (i) In just eight months the SACC has registered 7,035 new users. (ii) During the lock-down period, the SACC was central to avoiding justice adjudication interruption; online access to the repository of the digital constitutional folder of each case (that is available 24/7) has had nearly 2.5 million visits. (iii) The SACC accounts for an increase of 120% in time saving (efficiency) compared to manual processing. (iv) There have been 20 public hearings streamed via YouTube, Twitter, and Facebook, which spanned 3,457 minutes and reported an average of 55,229 views, and 370,000 interactions—i.e. promoting public participation and transparency across decisions. (v) The court has received more than 60 amici curiae from lawyers, activists, scholars, leaders from minoritarian groups, and national and international organizations. During these hearings, the Court has addressed central topics concerning historically discriminated groups such as gender equality, religious freedom, and indigenous peoples and mining.

The SACC project has a mid-term scope and national and international impact as well as varied beneficiaries. First, although the system is deemed to be used mostly by the Ecuadorian population, participation by international NGOs, academics, and third parties is also welcome, chiefly by filing amici curiae. In addition, the software will continue updating and adapting to new requirements. Next, during the second phase, the project will implement special software and language tools to facilitate access for blind, deaf, and indigenous people (not speaking Spanish). Whereas the SACC's third phase will incorporate intelligent searching engines to allow litigants, lawyers, scholars, and everyone interested to easily and intuitively find key rulings and opinions regarding rights and jurisprudential rules. Moreover, artificial intelligence will contribute to multiplying Court's efficiency when adjudicating and issuing mandatory precedents, not to mention it will serve as a laboratory and example to other regional Courts.

The best practices of the project can be replicated, mainly, by: (i) Encouraging citizens to engage in public hearings via social networks such as Twitter, Facebook, or YouTube. (ii) Promoting transparency of the judicial activity through the publication of the decisions and other documents that build a repository that can be easily accessed by users. (iii) Users' handbook of the SACC and tutorial videos are public and could guide other institutions to construct their own virtual platforms that allow citizens to increase their access to justice.

Regarding sustainability, (i) since funding is central for the project development, we obtained a refundable loan specially designed for developing projects and administered by the Inter-American Development Bank. Along with the institutional budget, this loan will boost the project's feasibility over the next phases, such as hiring a specialized team, acquiring hardware and software, and investing in diffusion and promotion. (ii) In terms of environmental sustainability, the SACC reduces paper use since every document is handled digitally. It helps to reduce carbon emissions, since every process is more efficient and requires fewer resources from users and the institution. (iii) Regarding social sustainability, the project promotes equal access to every citizen demanding judicial services. In addition, efficient adjudication has an impact on people's attitudes toward justice and democracy. Overall, the SACC allows the Court (and hopefully the justice system) to navigate a transition into a thriving and more equal future for all citizens. 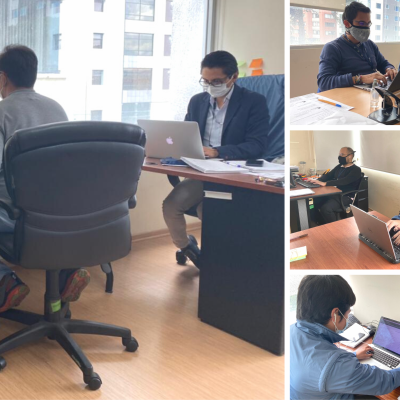 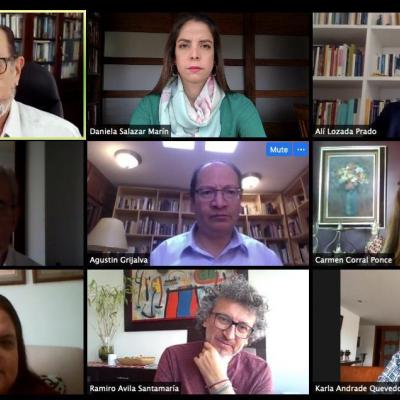 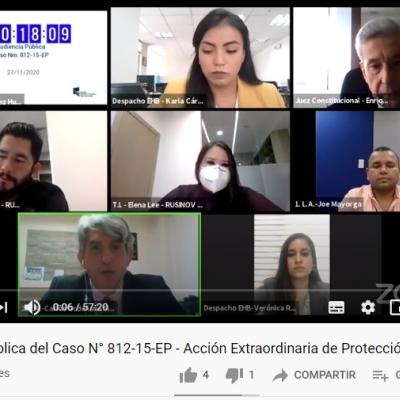