New data and insights coming soon! Check back to this page on March 11, 2020 for the release of the WJP Rule of Law Index 2020.

Watch the launch event or register to attend at usip.org.

The World Justice Project Rule of Law Index® is the world’s leading source for original, independent data on the rule of law. Covering 126 countries and jurisdictions, the Index relies on more than 120,000 household surveys and 3,800 legal practitioner and expert surveys to measure how the rule of law is experienced and perceived worldwide. Featuring primary data, the WJP Rule of Law Index measures countries’ rule of law performance across eight factors: Constraints on Government Powers, Absence of Corruption, Open Government, Fundamental Rights, Order and Security, Regulatory Enforcement, Civil Justice, and Criminal Justice. 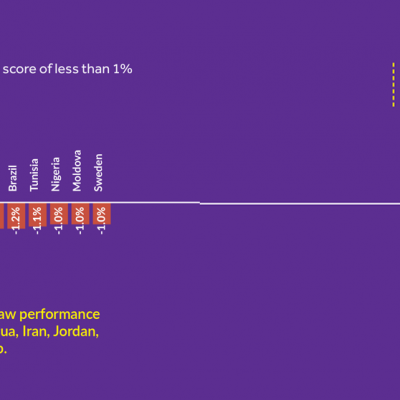 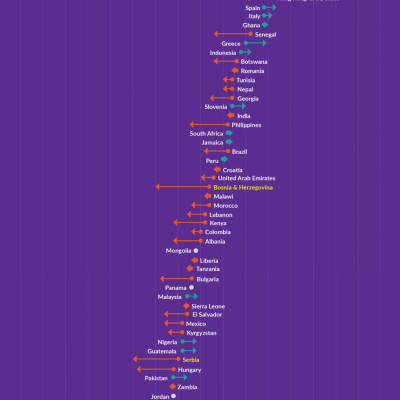 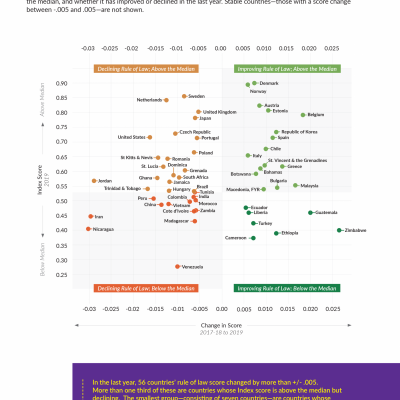 The new WJP Rule of Law Index scores show that more countries declined than improved in overall rule of law performance for the second year in a row, continuing a negative slide toward weaker rule of law around the world.

In a sign suggesting rising authoritarianism, the factor score for “Constraints on Government Powers” declined in more countries than any other factor worldwide over the last year (61 countries declined, 23 stayed the same, 29 improved). This factor measures the extent to which, in practice, those who govern are bound by governmental and non-governmental checks such as an independent judiciary, a free press, the ability of legislatures to apply oversight, and more. Over the past four years, Poland, Bosnia and Herzegovina, and Serbia have lost the most ground in this dimension of the rule of law.

The second largest decline over last year was seen in the area of “Criminal Justice,” followed by “Open Government” and “Fundamental Rights." On a positive note, more countries improved in “Absence of Corruption” than declined for the second year in a row.